A street event jointly organized by the government of the city of Buenos Aires and the Israeli embassy to celebrate the 61st anniversary of Israel’s foundation was yesterday [Sunday] disrupted by a gang of 15 or 20 people who emerged from a nearby subway station and laid into members of the public with clubs, chains and nunchakus.

Between blows they shouted slogans like “Death to the Zionist Jews!” and scattered leaflets bearing the name of the Revolutionary Action Front. Three people were taken to hospital for treatment, two of them are said to be in a serious condition. One police officer was also injured seriously enough to be kept overnight in hospital. Five arrests were made, the rest of the gang escaped. One of those detained is Leonardo Del Grosso, a prominent member of the far left Quebracho group; another was found to be carrying a sevillana, a kind of knife that’s quite unsuitable for peeling apples or slicing bread. 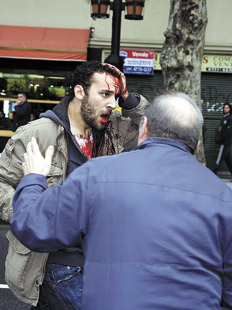 Later, hundreds of of far-leftists demonstrated— not to protest the brutal antisemitic attacks, of course, but to demand the release of five arrested attackers.

Argentine investigators discovered arms, bombs and flags with political insignia at a site where suspects in an anti-Semitic attack held meetings.

Located in Florencio Varela, a city on the southern outskirts of Buenos Aires province, the center was headquarters for the Front for Revolutionary Action, a group related to the five people arrested last Sunday after violent anti-Semitic attacks at a public celebration to mark the 61st anniversary of Israel’s founding. The flags also bore the face of Venezuelan President Hugo Chavez, who has been deeply critical of Israel in recent months.

The suspects – four men and a woman — were questioned by Judge Claudio Bonadio at a hearing Tuesday afternoon and remanded to jail. Federal prosecutor Carlos Rivolo rejected release on bond demanded by the suspects’ lawyer until completion of the investigation.

During the hearing, a group of the suspects’ supporters, part of the Front for Revolutionary Action “piquetero” movement, demonstrated for their release in front of the Comodoro Py Avenue Court building.