Good news for the anti-imperialist movement! The US is to break-up in 2010 along racial/ethnic lines, and we Europeans claim the Eastern seaboard! Sadly Mexico gets Disney World, so we will be stuck with Disneyland Paris until the then European President Blair tasks the European defence force with the liberation of Florida from the Mexican Narco Empire in 2015. 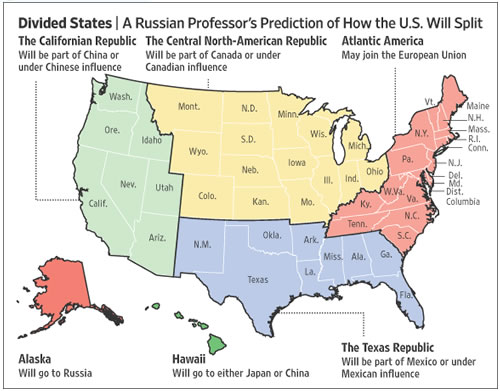 This map is the product of a former strategic advisor to Boris Yeltsin, called Igor Panarin:

Mr. Panarin insists he does not dislike Americans. But he warns that the outlook for them is dire.

“There’s a 55-45% chance right now that disintegration will occur,” he says. “One could rejoice in that process,” he adds, poker-faced. “But if we’re talking reasonably, it’s not the best scenario — for Russia.” Though Russia would become more powerful on the global stage, he says, its economy would suffer because it currently depends heavily on the dollar and on trade with the U.S.

Mr. Panarin posits, in brief, that mass immigration, economic decline, and moral degradation will trigger a civil war next fall and the collapse of the dollar. Around the end of June 2010, or early July, he says, the U.S. will break into six pieces — with Alaska reverting to Russian control.
[…]
The professor says he’s convinced that people are taking his theory more seriously. People like him have forecast similar cataclysms before, he says, and been right. He cites French political scientist Emmanuel Todd. Mr. Todd is famous for having rightly forecast the demise of the Soviet Union — 15 years beforehand. “When he forecast the collapse of the Soviet Union in 1976, people laughed at him,” says Prof. Panarin.

Todd’s views of the future of the US are similar to Panarin’s, if more geographically vague. Stopped clock and that.