This is a guest post by Epping Forest BNP Watch 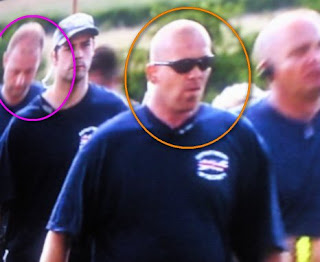 BNP district councillor Rod Law, who is contesting the Loughton Central seat in the Essex County Council elections, is pictured here (circled in pink) with convicted Oldham drug dealer John ‘Jock’ Shearer (circled in orange), also known as ‘John the Mong’ by some in the party.

BNP hardliner Rod Law is close friends with the football hooligan turned crack dealer, who once served as party leader Nick Griffin’s security chief but quit in one of the BNP’s many internal bust-ups. Shearer is just one of many criminals involved in the BNP.

On Facebook, where the picture was uploaded, Law and Shearer engage in hate-fests against black people, Muslims and ‘reds’, some of the main targets of far-right propagandists. Law also displays his admiration for dead Austrian neo-Nazi Joerg Haider, who praised the policies of Adolf Hitler and played down the persecution of Jews. He also states on the social networking site that he is a fan of Jean-Marie Le Pen, the antisemitic leader of France’s National Front. Le Pen has said that the Nazi Holocaust was a ‘minor detail’ and claims that his opponents are part of a Jewish conspiracy. In January 2007, Law attended a conference in London where he sat through anti-Jewish tirades from a close confidante of the Holocaust denier David Irving and from one of the leaders of the Islamic Party of Britain. 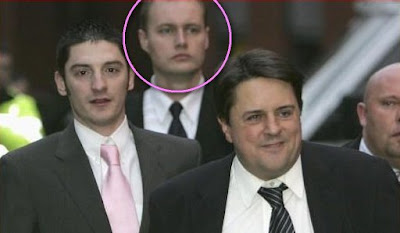 Rod Law (circled in pink, and pictured as part of the BNP ‘security team’ accompanying Mark ‘Young, Nazi and Proud‘ Collett and party leader Nick Griffin) was expelled from the RMT union in 2006 for threating the General Secretary. As a district councillor, Rod Law has used his position to oppose the creation of a multi-faith group to bring together Christians of all denominations, Jews, Sikhs, Muslims, Hindus and others.

He spends most of his time scaremongering about crime committed by “inner city youths”, although local police have stated that the vast majority of crime is committed by local residents. On one occasion he claimed that Davenant Foundation School, a Christian ecumenical school, was the source of gang violence in Debden due to the relatively high proportion of black pupils. In an attempt to smear the school, he claimed it had been in decline for years due to ‘inner-city youths’ – a BNP euphemism for black students. Far from “going downhill”, it has some of the best GCSE results in Essex and OFSTED has judged it “outstanding” in almost all areas. Desperate to win support for racial segregation and the expulsion of non-white people from Britain, Rod Law turned on schoolchildren and is fighting playground brawls. Waging war on schoolkids – how low can he go?

In recent years, the BNP has displaced Labour as the third largest party in the Loughton Central ward, although it has only had a major presence in two of the four district wards that comprise the county ward – Alderton, Fairmead, St John’s and St Mary’s. Rod Law one of the two district councillors for Alderton. The BNP lost the other Alderton seat in 2008, when it was won by the Loughton Residents Association. The LRA also won the Fairmead ward, also a former BNP stronghold. In the two other district wards that make up Loughton Central, the competition is between the LRA and the Conservatives, with the BNP failing to make any headway in these seats.

The seat is being defended by the LRA incumbent Chris Pond, who is currently also mayor of Loughton. The LRA has improved its electoral standing in the county ward and in 2008 got a combined vote of 50.7% in the district council wards in Loughton Central, up from 35.2% in the 2005 county council elections. Meanwhile, the Conservatives saw their vote fall from 28.0% to 22.3% and Labour has plunged from 17.2% to 6.7%. The BNP vote has rallied from 9.9% to 17.5%, largely on the back of Labour defections.

To be certain of winning Loughton Central, Rod Law would have to increase the BNP vote by 200% over the level achieved in 2008. This is an almost impossible task, especially if he is planning to rely on remaining disillusioned Labour voters. The best Rod Law can hope for is second place. But the Conservatives have put up the popular ex-LRA councillor Mitch Cohen for the seat, which could see them claw back some of the ground they lost in the district elections. Nevertheless, if the BNP comes second, it would significantly strengthen Rod Law’s position. Given his association with the ex-con Jock Shearer, it’s a scenario that Loughton residents should fear. 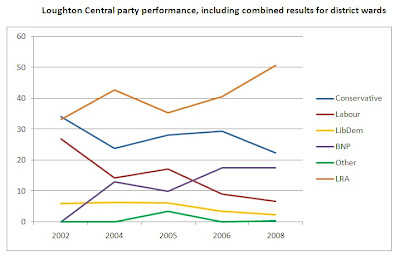