Let’s take another look at a man Brett has written about below (our posts crossed). 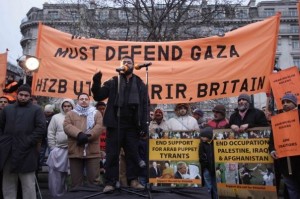 Presumably Mr Begg is familiar to many readers here. His (contested) Wikipedia entry and its links are one place to start for anyone who wants to learn more about him.

This is from a Telegraph article published in 2003:

This newspaper has learned that Moazzam Begg had his first brush with the law in 1994 when he was arrested as he showed up for work at a benefits office at Small Heath, Birmingham. When Mr Begg’s home was searched, detectives found the night-vision goggles and a bullet-proof vest as well as extremist Islamic literature.

Mr Begg was initially charged with conspiracy to defraud the Department of Social Security along with Butt. Bank statements found at Mr Begg’s house linked him to Butt and officers found a photograph of the pair together in Afghanistan. At Butt’s home they found a picture of him in Afghanistan brandishing an AK47 machinegun.

The charges against Mr Begg were later dropped for lack of evidence but the case against Butt proceeded. After his release, Butt travelled abroad and in 1999 he was jailed for five years after being convicted of terrorism in Yemen along with Mustapha Kamil, the son of Abu Hamza, the hook-handed cleric fighting deportation from Britain.

Last night Azmat Begg confirmed that his son had been arrested and charged in 1994 but insisted that this meant nothing, saying: “He was just suspected: the case was dropped.

“The items they [the police] took had nothing to do with al-Qa’eda or anybody. They were entirely innocent. If I have night-vision goggles does that make me a suspected member of al-Qaeda?”

When asked about the flak jacket that was seized, Mr Begg said that his son was merely indulging a “hobby” – which included collecting weapons. “He liked to collect things like that since his childhood. Once upon a time I had a cellar and he had a lot of arms and things like that.”

Moazzam Begg’s own explanation of the night vision equipment was that he needed it to find his way around the dark streets of Bosnia, where he was carrying out “charity work”.

A bookstore in Birmingham where Begg was a co-owner and worker has also had its troubles, according to this Observer report from 2007:

Books and DVDs promoting suicide bombing, glorifying terrorism and advocating the killing of homosexuals have been on sale at the Birmingham bookshop raided by police last week as part of their investigation into an alleged plot to behead a British Muslim soldier.

Last year an undercover Observer reporter visited the store, Maktabah al-Ansar, and was sold a handful of extremist literature and DVDs.

Maktabah, which is Arabic for library, has been raided three times under the Prevention of Terrorism Act because of the inflammatory literature on its shelves and has links with several terror suspects. Nobody from the business has ever been charged with an offence.

One DVD, 21st Century Crusaders, begins by stating: ‘History remembers two colours: black, the ink of scholars; and red, the blood of martyrs.’ Footage is shown of the 9/11 atrocities with a poem that says: ‘Suddenly their storms arise to demolish their fortresses and proclaim to them we shall not stop our raids until you abandon our lands.’ Pictures of Jews are subtitled: ‘Brothers of pigs and monkeys.’

An interview with former Guantanamo Bay inmate Moazzam Begg is featured declaring that the US has begun a war on Islam. During a raid on the premises in 2000, Begg – who worked in the bookshop and is understood to have been its co-owner – was arrested under anti-terrorism laws. He was later released without charge.

I don’t know if Begg is still connected to it, but Maktabah is still in business, pushing jihadi preacher Anwar al Awlaki and other extremists.

One of the videos on offer – “21st Century CrU$Aders” – features Begg himself.

At 4:55 in the first tape on that page Begg offers this view on America’s fight with terrorists:

I think the United States in its initial appearance didn’t want to directly say that this was a war on Islam, but I think by blunders and behaviour towards the Muslim world in this respect it leaves few with little doubt that it is in fact a war against Islam.

This is utterly ridiculous talk. What is the faith of the Iraqi and Afghan soldiers fighting jihadis alongside US forces? Are they all bad Muslims, warring on Islam?

As for Iraq, in this February 2009 poll (pdf) for broadcasters ABC, BBC and NHK 35% of Iraqis named security as the country’s “biggest problem”, ahead of politics, the economy and social issues. There’s less confidence in US troops than in Afghanistan – two thirds of Kurds have confidence in them, falling to 25% among Shiites and just 7% among Sunnis. But the Iraqi army and police get the highest confidence ratings of several groups – 73% and 74%, respectively, far ahead of the national government, local leaders and militias. These are of course the very same security forces attacked by the “resistance”, cheered on by idiots in Britain.

And here is a little news story that further underlines just how absurd Begg’s poisonous “war on Islam” talk is:

KABUL, May 5 (Reuters) – Bibles in Afghan languages sent to a U.S. soldier at a base in Afghanistan were confiscated and destroyed to ensure that troops did not breach regulations which forbid proselytising, a military spokeswoman said.
…
“It certainly is, from the United States military’s perspective, not our position to ever push any specific kind of religion, period,” chairman of the U.S. Joint Chiefs of Staff Admiral Mike Mullen told a Pentagon briefing on Monday.

At 9:00 in same tape, Begg says this of hate preacher Ali al Timimi:

He cannot be regarded as an extremist, fundamentalist, lunatic type terrorist scholar that they claim abound. He is one of the most reasonable and middle of the path scholars that I have come across, who not only make sense in everything that they say, but they back it up with evidence from the Qur’an.

Ali al Timimi has been convicted of terrorism offences in the United States. Here’s why:

Kwon recalled driving Al-Timimi home from the mosque Sept. 11, 2001 after the terrorist attacks. He said Al-Timimi and another scholar argued, with Al-Timimi characterizing the attacks as a punishment of America from God, while his fellow scholar decried the attacks.

That night, as they drove from the mosque, Kwon said Al-Timimi had a request.

“He told me to gather some brothers, to have a contingency plan in case there were mass hostilities toward Muslims in America,” Kwon said.

Five days later, Al-Timimi met with Kwon again, this time at the young engineer’s apartment where he gathered a small group of friends.

“He told me to unplug the message machine and turn off the phones.”

Then, Kwon said, Al-Timimi advised the group that the effort to spread Islam in the United States was over and that the only other options open to them were to repent, leave the U.S. and join the mujahadeen — the holy warriors preparing to defend Afghanistan against the coming U.S. invasion.

Four days later, Kwon was on the plane to Pakistan, embarking on a jihad that would land him in prison.

According to his indictment (pdf), the crash of the space shuttle Columbia was joyous news for al Timimi:

This morning, the world heard news about the crash of the space shuttle. There is no doubt that Muslims were overjoyed because of the adversity that befell their greatest enemy. Upon hearing the news, my heart felt certain good omens that I liked to spread to my brothers.

First: The Name of the Shuttle: “Columbia” is the name of the shuttle, called after the name of “Columbus,” the sailor who discovered the American Continent in 1492 after the fall of Grenada, the last Islamic stronghold in Andalusia. Historians know that, after discovering the two American Continents, the Romans (the Christians of Europe) exploited their wealth in order to be able to control the Islamic World. The Columbia crash made me feel, and God is the only One to know, that this is a strong signal that Western supremacy (especially that of America) that began 500 years ago is coming to a quick end, God Willing, as occurred to the shuttle.

Third: The Crash Location: As soon as CNN announced the crash of the space shuttle nearby the city of Palestine, in Texas, I said to myself “God is Great”. This way, God Willing, America will fall and disappear (nearby Palestine). The State of Texas is also the state of the foolish, obeyed President Bush the son. And so we hope, God Willing, similar to the crash of the shuttle on his state, his nation would fall upon his head due to his foolish policy.

Fourth: The President’s Condolences to the American People: In the words that President Bush used to console his people, he referred to the Book of Isiah where there is a praise to God’s creation, His stars and planets. I said to myself, Praise the Lord, in this same Book of Isiah there are news about the coming of Prophet Muhammad and a warning of the destruction of the Jews at the end of time. [A citation from the Koran follows].And so, there are other signs that would take a long time to recount. For example, every time the Americans believe that they control the whole earth and the skies, and act as they wish, there comes a sign that reminds us that God, Almighty, is greater than his creatures, sitting on His Chair, handling everything, and that His angels act according to His commands. And so, he whoever will try to raise the Jews, who are a nation that God covered with humiliation and deserved God’s wrath, will be afflicted with divine humiliation and wrath as much as he supports them.

As I mentioned earlier, these are all ideas that came to me when I heard of the accident, and hopes that I wish God would fulfill, and God is the only One to know.

Yes, not extreme at all. Oh no. Too bad he’s not available for a Quaker “peace lecture”. Perhaps Begg can put in another good word for him tomorrow in Huddersfield.