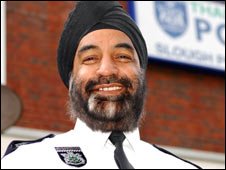 Sgt Kashmira Singh Mann, chairman of the association, told the BBC News website bulletproof turbans would allow such officers to abide by religious traditions as well as participate in all areas of the police service.

“We are looking at the issue because it stops Sikh officers serving in all roles,” said the Thames Valley Police officer who is based in Slough, Berkshire.

“It is a frustration for them – we see our colleagues putting their lives on the line and we want to serve alongside them.”

He said research had already begun to find a ballistic material for turbans, but that it would need to be passed by the Home Office before it could be used.

A bulletproof turban. How cool is that. I love Britain.

For now, if a British Sikh police officer is ready to put himself in serious harm’s way, wearing nothing more than a plain old turban to protect his head, I hope any silly health and safety busybodies in his way clear off.

So are regulations the issue here? I don’t know and would like to. Perhaps Sikh and Sikh-friendly readers here can help.

On a related note: