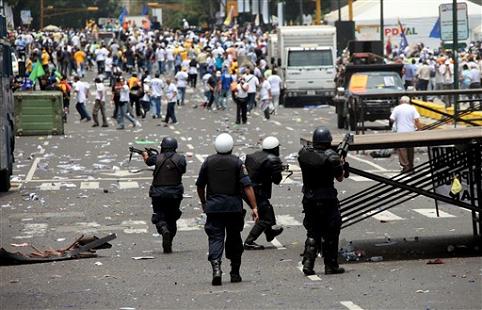 Police representing the “socialist” government of Hugo Chavez extend comradely greetings to workers participating in an opposition May Day demonstration in Caracas.

Venezuelan police using rubber bullets, tear gas and water cannons broke up a march by unions and political parties opposed to President Hugo Chavez on Friday in the latest clash between the government and critics.

Socialist Chavez has increased pressure on opponents in recent months after they won some key states and cities, including Caracas, in regional elections last year.

Friday’s march to mark International Workers Day and protest against government pressure on the opposition was repelled by police after a small group tried to push past a barricade. Protesters scattered to escape tear gas, bursts of water and volleys of rubber bullets fired into the air.

“The national guard had to disperse them with a bit of gas but we are not going to allow violent acts. These streets belong to the people, not the oligarchy,” Chavez said during a speech at a large march organized by the government a few blocks from the clashes.

Of course Chavez puts all the blame on the opposition as he is preparing the terrain to crack down on political opposition once and for all. Note that opposition and workers marches in the rest of the country went peacefully and outnumbered governmental rallies, chavismo preferring as usual to focus all of its energies in Caracas to create photo op for the beloved leader.

And I agree with The Washington Post; the Obama administration needs to speak out loudly and clearly against the Chavez regime’s increasingly harsh tactics aimed at domestic opponents.