Having spent some time in Damascus I, like DaveM, have acquired a very specific grievance, inane press coverage of Syria; especially, but not limited to, travel writing.

The Times has just published a perfect example of this aggravating genre. Under the title “Syria: land of hospitality and plenty” (and also “Our big family adventure in Syria“) the author speeds through the obligatory travel writer cliches at an impressive rate:

In a field of spring flowers and 5th-century ruins a young Bedu leapt down from his tractor and ran over. He addressed us in the common human language of smiles and welcomes, shaking our hands with a palm as leathery as the soles of our shoes

And some standard travel advice:

There are basic rules to follow in the Middle East. Cover up unless you are in the modern parts of big cities such as Damascus. Don’t head down alleys that look interesting unless you have a good sense of direction. And watch your bag in the crowded souks.

But my point is not to grumpily complain about the dull predictability of travel writing. No, I have absolutely no problem with a couple of other articles which the Times has also published in the last couple of days about travel in Syria.

What annoys me is, firstly, the title “Syria: land of hospitality and plenty” and another sentence later on:

Travelling across country, two memories stand out. First is the sense of plenty […]

Land of plenty? In many areas of the country the electricity struggles to stay on around the clock; water is something that runs from the tap (rather than from the large reserve tanks you keep on your roof) for a matter of hours in the week and queues for fuel, at least when I was there just under a year ago, often stretch around the block. Poor harvests and the end of government fuel subsidies have caused food and oil prices to rocket in the last 18 months and many are desperately poor.

I used to have a favourite fried chicken place. Not only did I get to know some of the staff who worked inside, but I also came to recognise the small Iraqi boy who would run in the second you had stopped eating and steal whatever scraps remained on your plate. You would then see him returning to his family, seated on the floor near to the cafe, to share what he could find. The boss wanted his staff to stop the boy but, to their credit, the young, fit men working there were always that little bit too slow to stop him from getting to the fullest plates.

I was also rather annoyed by the very first paragraph:

The “I Love Bashar” magnet has taken its place in the patchwork holiday album on the fridge door. It certainly stands out from the more traditional images of Thorpe Park, Yosemite and the Rockefeller Centre.

This might seem an unfair criticism as I have a Bashar keyring and lighter. A friend of mine even has an “I Love Bashar” poster over her bed at university. But this isn’t memorabilia like a fridge magnet from Eurodisney.

People who have spent time in Syria keep their Bashar trinkets partly as a souvenir, and partly as a reminder of the Bashar posters that are omnipresent in Syria. 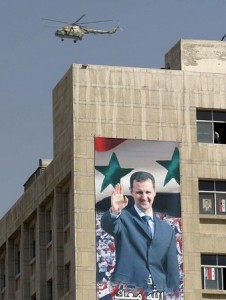 Having a tyrannical despot staring down on you as you buy a juice, surf the internet, chat in a cafe, sit in a bus, queue in traffic or do pretty much anything is a bizarre feeling. It takes some time getting used to and it is slightly unfortunate that the Times makes light of one of the less obviously unpleasant facets of a deeply unpleasant regime.

Bashar is, of course, in charge of one of the State Department’s “State Sponsors of Terrorism“, a list it has been on since 1979. But this is just one of the many things wrong with Bashar and in the country he leads.

You have the case of Maryam Kallis, a British woman who was detained in the street in March by the Syrian Mukhabarat (security services) and who hasn’t been seen since; or the fact that Bashar, former head of the Syrian Computer Society, presides over one of the five countries in the world in which it is most dangerous to be a blogger.

The plight of the Kurds in Syria is dire.

This is what Human Rights Watch have to say:

Discrimination and Violence Against Kurds
On March 12, 2004, a clash between supporters of rival Kurd and Arab soccer teams in Qamishli, a largely Kurdish city near the border with Turkey, left several dead and many injured. The following day, Kurds vandalized shops and offices during a funeral for the riot victims, and the violence spread to nearby areas. Police responded with live ammunition, killing at least two dozen people, injuring hundreds, and arresting many hundreds more. Human Rights Watch has received credible information that some of those detained were tortured in custody, and at least two of them reportedly died in detention.

Kurds are the largest non-Arab ethnic minority in Syria, comprising about 10 percent of Syria’s population of 18.5 million, and have long called for reforms to address systematic discrimination, including the arbitrary denial of citizenship to an estimated 120,000 Syria-born Kurds. In June 2004 the authorities reportedly warned leaders of two unrecognized Kurdish political parties that no independent political activities would be tolerated.

And once Bashar has jailed his opponents he has a bad record for massacring them, as came to light this week.

Syria has been accused of carrying out a massacre of dozens of political prisoners and concealing it by burying the bodies in mass graves in the middle of the night. Human rights activists claim the killings happened at Sednaya prison, situated in North-West Damascus, which is run by the regime’s military intelligence and holds hundreds of Islamist activists, many of whom have never stood trial.
The prisoners are reported to have been killed during riots that erupted at the prison last December

Sednaya is a beautiful town in the hills outside Damascus. Mainly Christian and the site of an ancient monastery, it’s home to one of the most notorious prisons in Syria. This wasn’t even the first time in 2008 that Islamist prisoners were massacred there, at least 25 were killed in July as well.

Which makes these sentences all the stranger:

Nor does Syria feel like a dictatorship. There are plenty of police on the streets and we saw the occasional army base up in the hills near the border with Turkey. But people seem relaxed and relatively comfortable.

It might not feel like a dictatorship to her, but I can assure her that it does to all Syrians who live in constant state fear of the Mukhabarat who can “disappear” you pretty much at will, tap phone lines as a matter of course and ensure that freedom of speech remains an entirely alien concept for many Syrians. If you step out of line it’s not just you who gets interrogated, it’s your family, your neighbours, the guy you buy bread from in the morning and the juice vendor on the corner. Or any one of those people could be a Mukhabarat informer.

I’m not suggesting that travel writers shouldn’t write about Syria. I can see little wrong with a piece saying “castle A is great, restaurant B has good fish but hotel C has cockroaches” and steering clear of the political situation.

But what makes travel writers give in to the mad desire to comment on the politics of a country with a recent history as troubled as Syria’s? All they succeed in doing is presenting a horribly simplistic version of events which whitewashes the terrible suffering of the Syrian people at the hands of Bashar al-Assad’s regime.