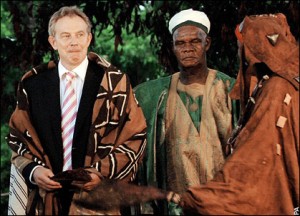 Nine years ago, Sierra Leone was a basket case. The so-called “Revolutionary United Front” guerillas rampaged through Freetown – which they were trying to take over –   chopping off the limbs of civilians with machetes as they went.

Now, Sierra Leone is hoping to turn itself into a popular tourist destination. And Tony Blair is a Chief.

PS: The majority religion in Sierra Leone is Islam.