Today is St. George’s day, and to celebrate over at Socialist Unity, Andy Newman has a post up about St. George. The first thing you’ll see is this picture: 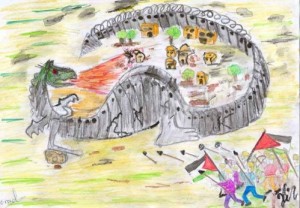 The Leicester-Bethlehem friendship link organised a children’s art competition in 2007 on the theme of St George, to raise awareness of Palestine among the English children, and to give welcome contact with the outside world for the children of Palestine. You can see more of the pictures, and read more background here . The picture shown here from the Ghirass children’s cultural centre in Bethlehem depicts the dragon as the Israeli built Apartheid wall, and St George is leading Palestinians to slay it.

If you follow the links on Newman’s post, you’ll see that the brains behind the operation is Richard Goodman, who asks:

Tariq in Bethlehem has St. George slaying the Dragon of difference that builds walls between people. His saint stands for global responsibility. What ‘dragons’ in the world today do you think need slaying?

Another cartoon on Goodman’s website, one of the two cartoons which Goodman features prominently, appears to provide the answer: 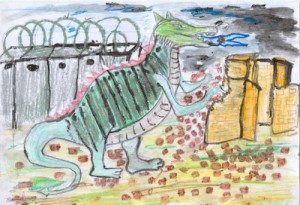 Now, I’m all for supporting St. George’s true identity as a Turkish-Palestinian dark-skinned Arab, yet to repackage St George as an anti-Zionist, and to use English nationalism as a way to get English children thinking about slaying the ‘Israeli dragon’ is terrible.

But at least St. George is a hero, unlike, say, the Crusaders.

Surely no-one on the Left would praise them?

Think again. A couple of weeks ago, on the Viva Palestina facebook group, RESPECT party member Carole Swords promoted an article in praise of the Crusaders, which includes the words:

Back in the days of the Crusades the Archbishops of Canterbury included Christian men of action like Baldwin and Hubert Walter, who donned armour and took up their sword to fight the good fight (as they saw it) for their belief in the Holy City and what it stood for. Times are different now, but unless the Western Church shows firmer leadership and more grit it will lose the Holy Land and more of its followers will renounce their baptism.

Meanwhile, today in the Independent you can read a “left-wing” defence of Mahmoud Ahmadinejad, whose own brand of religious bigotry is positively mediaeval.

At least these examples provided by Andy Newman, Carole Swords and Adrian Hamilton help us distinguish the Progressive Left from the Regressive Left.