This is a guest post by Gold and Popcorn 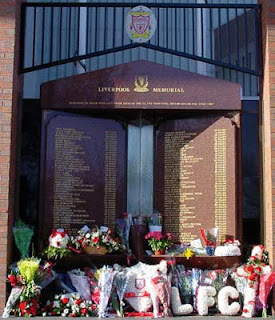 I was born in Liverpool, and I’m a Liverpool fan. Although Fonthill Road, Kirkdale, where we lived when I was a nipper, is pretty much equidistant from Anfield and Goodison Park, ours was nonetheless a Red family. Growing up, my main passion was for music, so I was pretty much the armchair supporter of the family compared to my younger brothers, both of whom went to the match on a more regular basis. Despite that, I was still enough of a fan to cry like a baby when Charlie George scored Arsenal’s second goal in the 1971 FA Cup Final, denying a great Shankly team their first chance of domestic silverware since 1965.

I remember exactly where I was on the afternoon of April 15th, 1989. I was sat in the Queens in Winsford, having a bevvy with a few mates when, not long after kick-off time, a Man United fan we knew wandered into the lounge from the bar next door. He looked over at us, shaking his head and muttering, “Fuckin’ scousers…”

“It’s all gone off at Hillsborough. Your lot are on the pitch, players are back in the dressing room. Fuckin’ typical. Don’t know how to behave yourselves, you lot, do yer? It’s on the telly next door – go and have a look.”

My heart sank. At first, I thought we were in for another repeat performance of Heysel, where a dilapidated stadium, non-existent crowd control and several hundred Liverpool fans spoiling for a fight resulted in the death of thirty-nine people, mainly Juventus fans. We took our pints into the bar, where the BBC had temporarily abandoned their Saturday afternoon horse racing coverage to go live to Hillsborough. By this time, it had become apparent that this wasn’t another incident of two rival firms going up against one another, but something much more awful. The pictures showed scenes of absolute chaos. Someone in the bar called out as he spotted a lad we all knew helping a few others carry someone (who was clearly in a bad way) away from the Leppings Lane end towards the centre of the pitch. People were wandering round near the goal, dazed and in obvious distress. Others were using advertising hoardings as makeshift stretchers. The commentary spoke of unconfirmed reports that people had actually died. The mood in the pub changed, and it stayed changed. Winsford was a Cheshire overspill town, full of Scouse families who’d moved there during the 60s, and the local LFCSC branch used to take a coach from the Queens to all the home games. Nobody was quite sure how many of the regulars had made their way over to Sheffield that day.

Although I knew his face from around town, I never knew Vinny Fitzsimmons personally. My youngest brother Billy did, though. Vinny played in goal for his Sunday league team, and Billy used to describe him as “one of the best reflex keepers I’ve ever seen”. Vinny went to Hillsborough that afternoon with his young son. Although his lad came home, Vinny never did. I’ll never forget picking up the phone the following afternoon, and hearing my brother in tears, as he told me that he’d just had it confirmed that Vinny was amongst those who’d died. Personally, I find “me too” attempts at muscling in on the grief of others to be pretty tasteless on the whole, but when you see someone you love in pain, how can you help but be affected by it? I began to think, not only about the (at that point) ninety-four others who’d died along with my brother’s dear friend, but also about all the other people whose lives would never be the same again. A few months later, I was at a family party back in Liverpool, and got talking to a cousin I hadn’t seen for a few years. The subject turned to Hillsborough, and she told me that a friend of hers, Gary Church, was amongst those who never came home from Hillsborough. Years after that, when I was down in London, I met an Evertonian who, despite his allegiances, is the model of a sound lad, and someone who’s since become a firm friend. I remember him telling me of how he went to three funerals in the same week, for three friends who left their homes on the morning of April 15th 1989, expecting to enjoy a game of football and be back home talking about it in the pub that evening.

In the twenty years since Hillsborough, a widely-held view of Scousers has emerged. Many frequently refer to Liverpool as “self-pity city”, or call us whingers, or sneer at what they see as a “victim mentality”. I can’t be bothered dignifying those views, particularly when they come from other football fans; after all, there but for the grace of God. But something I’ve seen and heard a lot over the last few days (and indeed the last couple of decades) is people musing upon why the anniversary of the Heysel disaster never seems to be marked with the same reverence. Now, this is just my personal opinion, but I imagine it to be because, collectively, Liverpool fans are ashamed of their involvement in that tragic episode. And rightly or wrongly, people tend not to dwell upon things they’re ashamed of. Sad, but there it is. Personally, I think that waiting fifteen years before an official commemoration of the tragedy is something to be ashamed of as well, and, although the significant public display of contrition at 2005’s Champions League game between Liverpool and Juve at Anfield was both appropriate and profoundly moving, I’m not going to pretend that I can’t understand the feelings of those bianconeri who thought such a gesture was too long coming. But regardless of all that, there are other reasons why Hillsborough resonates in a way that perhaps Heysel doesn’t. It’s because, above all else, Hillsborough represented a massive dereliction of duty on the part of the South Yorkshire Police, an institution which supposedly exists to protect people as well as to uphold law and order. Yet there are scores of reports from the scene which claim that, once it became apparent there was something seriously wrong in the Leppings Lane end, the police did nothing to help, and in some cases even prevented people from escaping the crush or helping the injured, dead and dying. This was further compounded by an attempt to cover up the culpablity of the police, and, with the aid of certain sections of the media, shift all blame for the disaster onto the fans. After all, we all saw what they did at Heysel, didn’t we..?

Kelvin Mackenzie is very high up on a very short list of people whom I truly despise. As editor of The Slum at the time of Hillsborough, he was directly responsible for an unforgivable smear on both the Liverpool fans who were at the game, as well as the victims and their families. Suffice to say that the content of this smear, which was widely repeated, were subsequently revealed to have been outright lies. Across Merseyside, a widespread boycott of The Slum soon followed in the wake of their April 19th front page story, which remains to this day. Kelvin Mackenzie has since been revealed as a craven liar on numerous occasions, but for him to withdraw, as he did in 2006, the half-hearted apology he made in front of a Commons Select Committee in 1993 with the words, “I was not sorry then, and I’m not sorry now”, reveals a lack of basic human decency that most of us would consider reprehensible in anyone. It beggars belief that someone like him, who would use a position of influence to mock and abuse the dead and the suffering, continues to have any credibility at all within his profession, much less that others still consider him worthy of being given a platform to espouse his view of the world on otherwise credible programmes such as the BBC’s Question Time. My contempt for him knows no bounds, and I’m certain I’m not alone. Fuck him.

But enough of that. Today is about the 96 people who died just because they wanted to watch a game of football. It’s about their families and their friends. But it’s also about those who went to the game that day, but who came home different people, whose lives were irreparably damaged, who couldn’t come to terms with why they survived when others weren’t so fortunate, and who carried the guilt with them for years afterwards. It’s about those people who did the right thing and tried to help in whatever way they could, however small. It’s about those rival fans who set aside their allegiances to offer sympathy, tributes and support, knowing that it could so easily have been, say, 96 Celtic, Forest, Everton or Arsenal fans who lost their lives that spring afternoon. It’s about those who strive to overturn the shameful cover-up, who struggle to reopen the inquiry, who continue to ask the many questions that still remain unanswered about Hillsborough. It’s about those who seek the real truth about what happened on April 15th 1989. Remember them all; not just today, but every day.