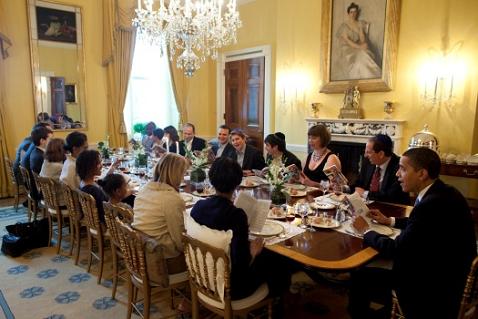 Despite sneering from some know-it-all commenters, the White House Passover seder hosted by President Obama was not some kind of New Age, prettified, revisionist affair. It turns out they used the Maxwell House Coffee Haggadah (complete with recitation of the ten plagues— blood, boils, diseased cattle, locusts, slaying of the first born and the rest). And for an American seder, you can’t get more traditional than Maxwell House.

Further update: And finally, as I assume everyone knows, the Passover story of the Hebrew people’s liberation from Egyptian bondage has great resonance in African-American history, going back to the era of slavery in the South. Here’s Paul Robeson (and no, I didn’t like his pro-Soviet apologetics either, but what a voice) singing the traditional “Go Down Moses” (aka “Let My People Go”):