Washington, DC, where I live, is famous for its cherry trees (a pre-World War II import from Japan) and their beautiful springtime blossoms, which have reached their peak about now.

The most famous cherry trees are around the Tidal Basin near the Jefferson Memorial. The last time I visited there at blossom time, a few years ago, the crowds were so enormous and so jostling that enjoyment was not an easy task. So I’ve limited myself to appreciating the trees around my own neighborhood– like this one. 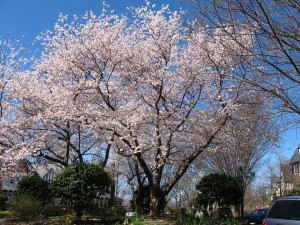 In the thread to Neil D’s post about tea, one commenter wrote:

What is this garbage doing on an allegedly progressive political website?

Let me refer him to George Orwell, one of the twentieth century’s great political writers, who was a fan of both tea and springtime:

Is it wicked to take a pleasure in spring and other seasonal changes? To put it more precisely, is it politically reprehensible, while we are all groaning, or at any rate ought to be groaning, under the shackles of the capitalist system, to point out that life is frequently more worth living because of a blackbird’s song, a yellow elm tree in October, or some other natural phenomenon which does not cost money and does not have what the editors of left-wing newspapers call a class angle?

In that spirit, I urge everyone to push themselves away from their keyboards and go outside and enjoy whatever of the natural world is available to them.

I was lucky enough to be in Washington D.C. two years ago, just at the end of the cherry blossom period, where I met Gene.

This song, by the Magnetic Fields, reminds me of the occasion: