Here is a picture from the G20 protest of a brave anti-capitalist outlining his alternative vision of a brighter future for mankind. Cathode ray tubes were so more effective in this situation don’t you think? 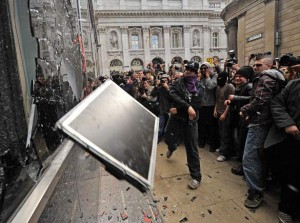 I count roughly about 19 photographers (not including the one taking the picture) standing watching 5 protestors. There is the possibility that the protestors included a high proportion of the Flickr community, but I suspect many of the photographers are there for journalistic reasons.

The fact the media are present at events like G20 will influence protestor behaviour. That’s no big insight, that’s why protestors attend these events. However, when the media outnumber the protestors and acts like the above are performed, seemingly to cue, how much complicity in the event is there? Do the photographers say “Can you throw that again, after I get the angle right,”? Did the photographers gather round the individuals, or did the individuals go the cameras?

In fact, isn’t there something rather ironic about an anti-capitalist protestor acting out his expected role so capitalists can sell newspapers?