Does anyone have any firsthand accounts of the G20 protests London Wednesday?

Not that there’s any shortage of things to protest. But judging from this clip from the Stop the War Coalition, it was largely about freeing, freeing Palestine– which is a rather ambiguous slogan, but which seems to have little to do with two states existing side by side in peace and security.

Did the antisemite Mahathir Mohamed speak as advertised at the Stopper rally in Trafalgar Square?

Via Franks Owen’s Paintbush, here’s a picture to warm the hearts of our free-marketeer readers. Although I think these guys are as full of crap as their Republican counterparts in the US, I give them points for originality. And I guess they didn’t trash any banks. 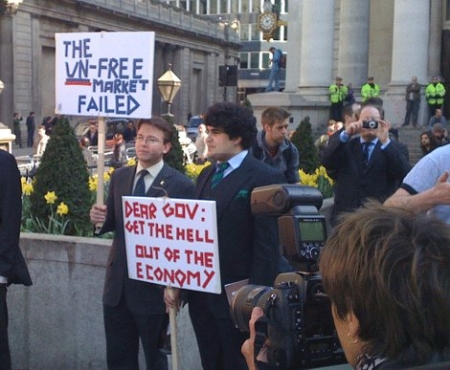