The “Stop the War Coalition” are holding a public meeting on the 30th March at Friends Meeting House entitled “Solidarity with the struggle for Peace and Justice in the Middle East”.

In this meeting, not one, but two of the speakers are Hezbollah representitives. Dyab Abu Jahjah you all know about.

The other is Lebanese Member of Parliament Hussein El-Hajj Hassan 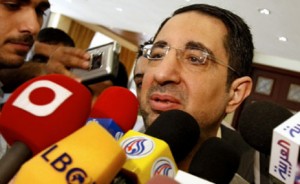 who’s from the Loyalty to the Resistance Parliamentary Bloc.

In other words he’s a Hezbollah MP.

This is Hizbullah’s bloc to further their interests through parliament. However if that doesn’t work they always resort to tried and tested means to get what they want.

Hassan also likes to work with other Lebanese political parties, here he is pictured with the leadership of the SSNP.

Hizbullah’s very own website, in their parliamentary activities section – features him.

And their Arabic section reports

“On Sunday 29th March 2009 Hussein El Hajj Hassan, member of the Bloc loyal to the Resistance, having accepted an invitation from a number of members of parliament, will be travelling to London to take part in a political, parliamentary symposium dealing with issues connected with the Middle East.”

No mention here of stopping wars – after all do they look like “peace activists” to you?

This is the party Hussein El Hassan represents.

A Hezbollah MP coming to London to addressing a “Stop the War” meeting held in a Quaker hall sounds like some sort of punch-line to a really bad joke.

Except this is real, and it’s going to happen on Monday.