This is an appeal for help by Colin

I was prompted by a HP report that the Friends of Al Aqsa website had announced that the Labour MP Sir Peter Soulsby would figure in a line up of after-dinner speakers at an event of theirs on 25 March to write to Sir Peter to ask whether he had agreed to share a platform with prominent Jew-haters. 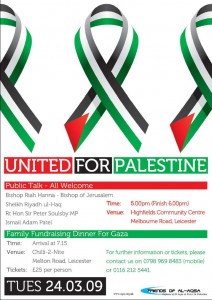 He replied that on the contrary he spent the evening in question Westminster and dined cosily with his wife. I suggested he take the matter up with the Al Aqsa people who seemed to be smearing his reputation, but I’ve heard nothing since.

Do we have any among our readers in his constituency who could take this up with him locally? It seems strange, to say the least, that Islamist bodies can simply say that a Labour MP is part of their team without contradiction. Did they ask him and why? If he didn’t consent, does he mind that that they used his name? Would he mind a BNP-type body using his name for similar purposes?