If, as I fully expect it will, the British government prosecutes George Galloway for breaking the sanctions against aid to Hamas, they have all the evidence they need to convict him in this clip (transcript here) from MEMRI (free registration required) of his speeches in Gaza after the arrival of the “Viva Palestina” convoy. 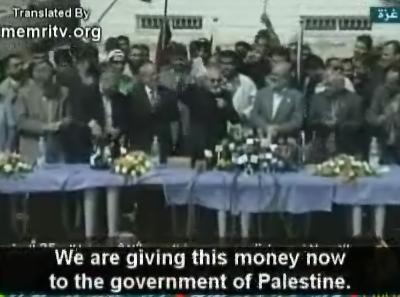 Conveniently it’s almost all in English, so you don’t have to trust MEMRI’s sneaky Zionist translators.

A couple of other things to notice:

–While Galloway told his small audience in New York that “I am not a supporter of Hamas,” he told his Gaza audience:

And he is our prime minister also, because all over the world, there has grown a slogan: In our thousands, in our millions, we are all Palestinians. All of us are Palestinians, and Ismail Haniya is the elected prime minister of all of us.

–While Galloway in New York called for a “single-state option,” in which Jews, Muslims and Christians could live as equal citizens, he told his Gaza audience:

Last night, in this square, an old man reduced me and my colleague, Sabah Al-Mukhtar, who has been with me as my right hand all of this way… This man made us cry. He said: “With friends like you, with friends like this convoy, it makes us believe that one day, we can return to our country, that we can drive them away, and we can return to our country.” Believe me, you will return to your country. Palestine will be free. Palestine will be free.

Any guesses who “them” are, George?