The annual Charity Commission Inquiry Into Something Or Other That George Galloway Has Done now has acquired the status of an English folk-festival.

This is what is happening, this time round:

The Charity Commission launched an inquiry today into an appeal raising money for the people of Gaza.

Viva Palestina, which is supported by Respect MP George Galloway, claims to have raised more than GBP1 million to provide humanitarian relief to people left destitute following the Israeli offensive in the region earlier this year.

The appeal resulted in a huge convoy travelling from London to Gaza to deliver aid to those most in need.

But charity watchdog the Charity Commission stepped in today to launch an inquiry into how the money raised was being used.

A spokeswoman for the Commission said investigators wanted to be satisfied that the money raised was being used for charitable causes.

She said the Commission made repeated unsuccessful attempts to contact the appeal and had now decided to launch an inquiry.

The Commission released a statement which read: “Following initial inquiries, including a review of the appeal’s governing document and other publicly available literature, the Commission’s view is that the appeal is charitable.

“The Commission has attempted to contact the appeal on repeated occasions over the last month in an effort to secure acknowledgement that the funds are held for charitable purposes.

“However, to date, the Commission has had no substantive response to the issues that have been raised, either from the appeal or individuals connected with it.

“In addition, the Commission has concerns over financial governance arrangements relating to the use of funds.

“These facts require further investigation, and given the failure to engage with the Commission, have now led to the opening of an inquiry under Section 8 of the Charities Act 1993.”

The Commission has various powers at its disposal if it decides that further action is required.

These include freezing bank accounts and appointing a new interim manager.

“We have been in correspondence with the Charity Commission about the campaign and we will be seeking clarification.”

I wonder what Viva Palestina can be thinking. My guess is: “Oh Shit!”

What, do you think, are the “issues that have been raised”, to which “the Commission has had no substantive response”?

The questions I would ask, would be the following:

1. Who did you give the goods and money to in Gaza?

2. What due diligence did you conduct to ensure that none of the organisations to which you gave goods and money, were connected to Hamas.

3. Did you know that any of the organisations to which you gave goods and money, were connected to Hamas?

4. Explain what is going on in this picture: 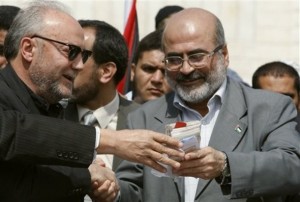 5. Oh, and can you tell us – who paid for George Galloway’s flights to and from the convoy?

Our comrade, Andy Newman at Socialist Unity has the Galloway reponse. He’s in full flow.

‘A political attack from both sides of the Atlantic’

In an extraordinary move, the Charity Commission in Britain has issued a hostile briefing about the Gaza solidarity campaign inspired by Respect MP George Galloway, just before he arrived in North America for a speaking tour. The Viva Palestina campaign, which organised a convoy of over 100 vehicles bringing aid to the besieged population of Gaza, has been in contact with the Charity Commission over the last week and sent it a substantial letter today in response to letters only received this morning.

Before receiving that letter, however, some officials at the Commission have issued a statement to the media to say they are launching a “statutory investigation”, even though the Viva Palestina campaign has sought to co-operate with all relevant authorities throughout. As Galloway touched down in the US to begin his speaking tour he made the following statement:

“If anyone needs investigating, it is the Charity Commission itself. There is no good reason why the Commission should jump the gun and issue a statement that it is launching an investigation when, in fact, it was about to receive the information and correspondence it had asked for. But there are plenty of bad reasons for this outrageous behaviour.

“Let the facts speak for themselves. On Friday, Rupert Murdoch’s Sun reports that a right wing, pro-war, Bushite in Canada is stamping all over free speech and seeking to ban me from the country. On Saturday, Hazel Blears wrote to the largest Muslim organisation in the country calling for the head of its Deputy Director General Dr Daud Abdullah, because of his support for the Palestinian cause.

“On Monday morning, I set off to the US and Canada for a sell out speaking tour on the issue of Palestine. While I’m in the air the Charity Commission decides not to wait for a letter it had asked for and which will reach it tomorrow, Royal Mail permitting, but instead launches a public attack on the aid convoy I led.

“This isn’t the first time the Charity Commission has intervened in a blatantly political way. It did it over the miners strike a quarter of a century ago and against other solidarity movements. It did it over my campaign against sanctions on Iraq, when it repeatedly went though the books of a political campaign despite the fact it never found anything untoward.

“In truth, I expected this kind of attack. So, I’m sure, did the millions of people whose support for the people of Palestine is an affront to the establishment and its organs. Doubtless supporters of the Iraq war and Israel’s aggression against the Palestinians will hope that this will damage solidarity efforts. They are deluded.

“We won’t be intimidated. Viva Palestina will continue to campaign. And if the reaction in Canada to these kind of attacks is anything to go by, I anticipate an even greater outpouring of support for our campaign – moral, political, financial and in every other way.”

PS: Anybody else notice how Galloway treats Viva Palestina as an extension of his person, in this press release?