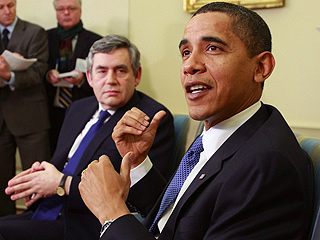 That’s what El Rushbo, among others on the American Right, have claimed recently. Some British journalists think so too.

First, Obama banished a bust of Winston Churchill from the Oval Office.

Intended as a symbol of transatlantic solidarity, the bust was a loaner from former British prime minister Tony Blair following the September 11 attacks. A bust of Abraham Lincoln—Obama’s historical hero—now sits in its place. A White House spokesperson says the Churchill bust was removed before Obama’s inauguration as part of the usual changeover operations, adding that every president puts his own stamp on the Oval Office.

But the British press, as is its wont, smells a snub. The Telegraph speculated that British diplomats’ pulse rates would soar, while The Times of London wondered if a shadow had been cast over the special U.S.–U.K. relationship. A spokesperson for the British embassy, though, threw cold tea on the notion, pointing out British politician David Miliband was the first foreign minister to meet with U.S. Secretary of State Hillary Clinton.

Maybe it’s no surprise that Obama wouldn’t want Churchill watching over his shoulder. After all, it was Churchill who, in 1952, ordered a crackdown on the Mau Mau rebellion against British colonial rule in Kenya, Obama’s ancestral homeland. Obama’s grandfather, Hussein Onyango Obama, was labeled a subversive during the uprising and spent months in detention.

With all due respect to Churchill– and I don’t say that lightly, the world would have been a much different and more dreadful place if not for him– I can utterly sympathize with Obama on this. It’s hardly a sign of Anglophobia.

Then came Gordon Brown’s visit to the White House, when the supersensitive really started freaking out.

First White House press secretary Robert Gibbs, announcing Brown’s visit, referred to a “special partnership” between the US and the UK, instead of the more customary, and supposedly more vaunted, “special relationship.”

When Brown arrived, Obama didn’t stand with the prime minister in front of the two nations’ flags for the TV cameras. He didn’t invite Brown for a Camp David sleepover, as Bush did with Tony Blair.

Then they had an awkward conversation about their respective sports prowess as they sat for the cameras in the Oval Office:

Brown didn’t get to speak for six minutes, after Obama had already answered two questions. Gamely, the snubbed premier tried to speak the president’s language.

“I don’t think I could ever compete with you at basketball,” Brown said. “Perhaps tennis.”

“Tennis? I hear you’ve got a game,” Obama replied mildly.

“Yes, we could maybe have a — have a shot,” the prime minister went on.

“We haven’t tried it yet,” the president said.

Obama smiled faintly. Brown spent much of the session with both soles planted on the floor, his palms gripping his thighs.

Apparently they didn’t even discuss their favorite brands of toothpaste, as Bush and Blair did in 2001. (Those two were delighted to find that they both brush with Colgate. And who could blame them?)

But Obama’s utter contempt for the British was revealed by the fateful exchange of gifts.

Brown presented Obama with a “historically resonant and tastefully symbolic” gift of a pen holder carved from the timbers of the HMS Gannet, whose sister ship supplied the wood used to make the Oval Office desk. Brown also gave Obama a first edition of Martin Gilbert’s seven-volume biography of Churchill. Obama, by contrast, came up with “what smelt like a panic buy,” a DVD collection of 25 American movies…

The First Ladies’ meeting was no better, said Sarah Vine in The Times. Sarah Brown arrived with “lovely” gifts for the Obama girls: trendy dresses with matching necklaces and a basket of books by British authors. Michelle Obama apparently had “an aide pop to the White House gift shop for a piece of merchandising”—she gave the Brown boys, Fraser and John, models of Marine One, the presidential helicopter. Such a self-aggrandizing gift is “inherently dismissive.” Worse, in the single photo the White House released of the women’s visit, “the angle is most unflattering to Mrs. Brown, who has the air of a woman very much in need of a stiff drink.”

So do any of our British readers feel as dissed as some of their journalists think they should?