At Socialist Unity, John Wight overstates the significance of the “Viva Palestina” aid convoy reaching Gaza, while denying the possibility of doing so:

The significance of the success of the Viva Palestina aid convoy in reaching Gaza cannot be overstated. Not since the Spanish Civil War has such an undertaken been attempted, much less succeeded, in solidarity with an oppressed people.

But a couple of the commenters are unhappy about the attitude of a certain Trotskyist faction.

I understand why the bourgeois media continue to pretend that the Viva Palestina convoy does not exist, but why is Socialist Worker doing the same? Is this further evidence of the terminal sectarian decline of this once significant, and in many ways admirable, organisation?

I am also gobsmacked if Socialist Worker is refusing to report the convoy. I know it’s a long standing joke that the SWP accuse everybody else of being sectarian whilst being sectarian themselves half the time, but this is really quite shaming. Solidarity with Gaza’s people against Israel’s evil is the only issue here that matters.

Well, nobody can accuse us of ignoring the convoy and its heroic leader. Here’s a photo of him (in his fetching MIB outfit) receiving an honorary Palestinian passport from Gaza’s Hamas leader Ismail Haniyeh, who doesn’t look like he’s been suffering from any food shortages: 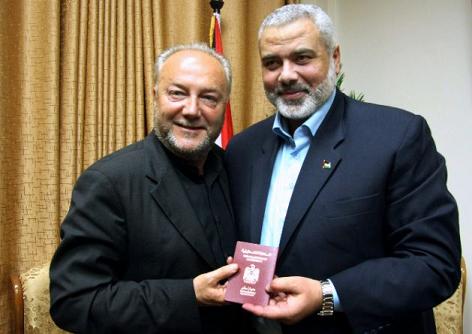