Rob Hoveman, Special Envoy to George Galloway in the UK , has responded to the allegations reported in the Guardian yesterday that the Viva Palestina convoy has made political peace with the Egyptian ruling party prior to entering the populous but corrupt Arab nation.

It says everything we need to know about cynical journalism (March 3) that the first time the Guardian chooses to cover the Viva Palestina convoy of aid to Gaza – an epic journey of over 5,000 miles – it is to repeat as fact tittle tattle culled from the blogosphere.

Er…thank you Mr Hoveman, so is this allegation of collusion just tittle tattle then?

Two hundred and eighty people have driven through eight different countries to deliver over a million pounds of aid to the stricken people of Gaza. Everywhere we have been, the convoy has been greeted with thousands of well-wishers who have provided food, fuel and accommodation.

I’ll repeat the question, is the allegation merely tittle tattle or is there some truth to it?

The Algerian government allowed passage across the border with Morocco for the first time in 15 years. In Tunisia we were joined by six of the people who the Lancashire police wrongly arrested and detained, preventing them reaching London for the start of the journey.

In Libya we were celebrated by thousands on the streets and a Libyan charity, inspired by the convoy, has established its own convoy of trucks to Gaza.

Mr Hoveman, I really must insist you answer the question…

We are currently negotiating entry into Egypt and passage through to Gaza.

A negotiation eh? That implies that compromises have to take place. Have any compromises been made?

The Egyptian authorities are doing everything they can to assist the process and we are in their hands, as we have been with all the other governments whose countries we have crossed in order to take these vital supplies into Gaza.

Oh. I see. So compromises have been made.

But what about the Egyptian opposition figures who’ve been awaiting the arrival of the soldarity convoy? Won’t they be disappointed that the long-awaited rallies in support of Palestine and against their repressive Government have to be cancelled? What about the public meetings? What about those who’ve been waiting weeks for the chance to show their support for the people of Gaza?

Hasn’t Galloway got anything to say to the Egyptian opposition?

The Viva Palestina convoy and the achievements of the 280 volunteers who have driven so far deserve celebration, not denigration by The Guardian.

Mr Hoveman, this isn’t about the Guardian. Now, do you have a mesage for the Egyptian opposition from George Galloway?

*sound of tumbleweed blowing a cross a lonely stretch of desert*

News just in from the official Viva Palestina website:

An official delegate from The National Party is in the border area preparing the welcome. He has informed the leaders of the route they will be taking and of the program of events awaiting them.

Note exactly who’s calling the shots here. By the way, does anyone know how to translate ‘paper tiger’ into Arabic? 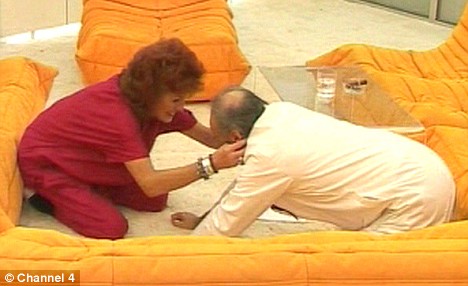