If you were an ultra right-wing anti-immigration political party you’d want a strong visual image to use in your political campaigning wouldn’t you?

And if you were a British right-wing anti-immigration party you might choose something instantly recognisable as redolent of this country’s finest hour.

You couldn’t go wrong with a Spitfire could you?

The [BNP’s] 2009 European Elections poster shows a nostalgic picture of a Second World War fighter plane under the slogan “Battle for Britain”.

But RAF history experts have identified the iconic Romeo Foxtrot Delta Plane as belonging not to Britons but to a group of Polish pilots instead.

The plane was actually flown by the celebrated 303 Squadron of the RAF – made up of Polish airmen rescued from France shortly before Nazi occupation. 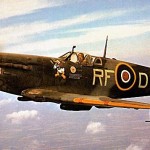