What’s the latest news from our modern day pilgrims as they head slowly across North Africa towards the Holy Land?

Dashed if I can make any sense of their latest adventure. See if you can do any better from a glance at these cryptic excerpts from their latest blog entry:

This morning Press TV reported that two female members of the convoy had been arrested by the Tunisian authorities.

The convoy leaders have now confirmed that the two women and the men who were also in the two vehicles are now in Libya – having been escorted there by the Tunisian authorities.

Chucked out of Tunisia? Into the Great Socialist People’s Libyan Arab Jamahiriya. How bizarre. But why?

I am told that the convoy would like to stay out of any local politics and just highlight the plight of the Palestinian people and their urgent need for assistance.

Blimey. What have they been up to?  Smuggling banned Islamist literature into the Northernmost country in Africa? Trying to overthrow the Government of the most economically competitive nation in Africa and the Middle East? Answers in the comments box.

It is likely that they will enter Libyan soil on Saturday as originally planned, where they will have another experience of North African hospitality.

Well, that’s one word for being arrested and booted out of a country isn’t it?

Update: It seems up to three hundred Stoppers were arrested and two of them were detained after trying to escape from the long arm of the Tunisian law if the testament of Mohammed Ishtiaq, one of the convoy-goers and a Birmingham City councillor, is to be believed:

He claimed the convoy was forced to drive for hours after entering the country from Algeria and all requests to stop for a rest were denied by police.

Coun Ishtiaq (Resp, Sparkbrook) added: “We said ‘we cannot continue’, they said ‘you must continue.’ They said accommodation would be provided 20 miles over the border and after a 13-hour drive we were really tired.”

The convoy, carrying food, medicine and clothing, tried to head back to hotels in the town of Gabes for the night.

But, according to Coun Ishtiaq, they were stopped by the police, placed under arrest and prevented from getting out of their vehicles.

“I wanted to go to the toilet at 3am, but they wouldn’t let me get out.”

He claimed two British women were “kidnapped” by the Tunisian security services when they tried to escape and driven off to an unknown destination.

Sounds a bit hairy doesn’t it?

How do you think the gallus Gallowegians have dealt with the whole unpleasant pallaver on their website?

You mustn’t laugh, promise me you won’t. Here’s their latest report:

Tripoli is about 430km away(about 270miles), so there is every chance that they will make it to the Capital tomorrow where the Libyan people will emulate their brothers in Morocco, Algeria and Tunisia in welcoming the Viva Palestina convoy with open arms and show their love and appreciation.

Fantasists, the lot of them. Utter bloody fantasists. 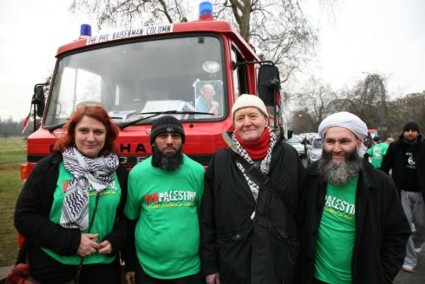