Opposition in Britain to Israel’s recent assault on Hamas in Gaza saw the allegation that Israel is in some way analogous to Nazi Germany become a central plank of anti-Zionist propaganda. Yet there is no serious similarity, in scale, intentions or outcome, between the Nazi destruction of European Jewry and Israeli policy in Gaza; which begs the question why it has become such a popular idea, when it causes deep offence to so many Jews.

The Nazi comparison wasn’t just something that appeared on the fringes of anti-Israel activity during this period. George Galloway MP, addressing the crowd at one anti-Israel demonstration in London, had this to say:

“In April and May of 1943, the Jews of the Warsaw Ghetto were surrounded by barbed wire fences, by the occupiers of Poland, and they faced a choice, in the words of the song of the partisans: ‘They could die on their knees or they could live forever’. And they chose to rise up against their occupier, to use their bodies as weapons, to dig tunnels, to fight, not to die in ones and twos of hunger and typhus, but to die as free men and women. Today, the Palestinian people in Gaza are the new Warsaw Ghetto, and those who are murdering them are the equivalent of those who murdered the Jews in Warsaw in 1943.”

The British Muslim Initiative, one of the organisers of the demonstrations, put it on their placards: 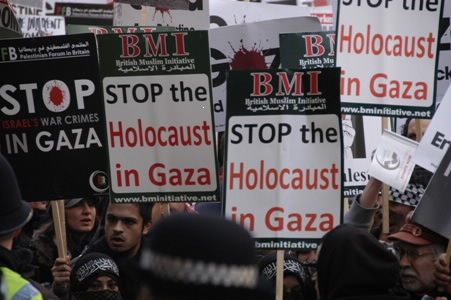 As did the Palestinian Forum in Britain: 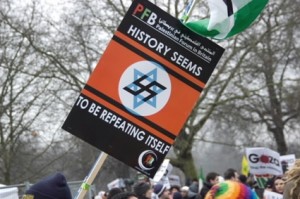 And lots of marchers even made their own versions at home.

Plenty of others have weighed in: Gerald Kaufman MP, Ken Livingstone, even a senior figure at the Vatican. There are many more examples. A charge that had previously sat on the fringes of anti-Israel campaigning has taken centre stage, superseding the Apartheid analogy that had previously driven much anti-Zionist discourse.

This is partly because analogies with the Holocaust fit what David Hirsh called “ready-made ways of thinking about Jews”. It’s easy, and it’s lazy, to reach for the Holocaust as the first source for a historical parallel to events involving Israel or antisemitism. But equating Israel to Nazi Germany also serves a political purpose.

Richard Falk, the UN Special Rapporteur on human rights in the Palestinian territories, invoked the Israel/Nazism comparison because “you have to shout to be heard”: accusing the Jewish state of behaving like Nazis gets attention, even if “The references to the Holocaust and to the Nazi policies were not meant to be literal comparisons”.

Martin Shaw, Research Professor of International Relations and Politics at the University of Sussex, concedes that it is an “extreme comparison” with several factual flaws, but argues that it is not “objectionable in principle” because “the use of an exaggerated comparison [is] a common ploy in political campaigning”.

John Wight of the Scottish Palestine Solidarity Campaign, argued that it was appropriate to describe Gaza as a “new holocaust” because “The irony of perpetrators of crimes against humanity claiming to represent victims of one of the greatest ever crimes against humanity is what gives the word ‘holocaust’ in relation to Gaza particular resonance – again, at least for those committed to ensuring that the horrors of the Holocaust are never repeated.”

So Wight, who has previously identified an actor called “international Jewry” that is part of the “hydra-headed monster” known as Israel, thinks that the Holocaust analogy should be used specifically because of the connection between Israel, Jews and the Holocaust. Falk and Shaw acknowledge that Israel is not the same as Nazi Germany, but think it is OK to use the comparison because it provokes a response. No surprise there: comparing Israel to Nazi Germany provokes a response precisely because the Holocaust has a “particular resonance” for Jews.

You might think that an anti-racist would see this as a reason not to make the analogy. But let’s leave such sensitivities to one side for now. More interesting is the idea that, even if the facts don’t fit, the comparison is valid because it has political utility. As Wight explains, Israel “is a state which claims to represent the victims of the Holocaust, which largely derives its moral legitimacy from that monstrous crime, and which has been able to violate and flout international law with impunity in its treatment of the Palestinians as a direct consequence of the international guilt which pervades the ruling classes in Europe and the US over the Holocaust.” Take away the moral weight of the Holocaust, so the argument goes, and Israel loses its right to exist, or least to act as it wishes.

We’ve seen this line of thinking before.

The Islamic world has the financial means to publish, broadcast or otherwise disseminate the historical, factual data leading to the truth…. There are at this moment already in existence organizations which, if properly funded, could become the nucleus of an independent, worldwide information network capable of countering the now virtually unopposed Zionist disinformation and hate propaganda networks. One such example is the Zundelsite, a United States based website that has exposed the so-called “Holocaust” as an extortion tool…that yields Israel the money, power and excuse to occupy the Palestinians and to intimidate its neighbours such as Syria, Lebanon, Iran and other Arab nations…. Take the Holocaust away, and you will have severed the financial water well that feeds an evil oligarchy and repressive system!

Or as Scottish Islamist writer Yacub Zaki put it, rather more succinctly:

“David Irving has the right idea, destroy the Holocaust myth and you have destroyed Israel.”

Now, it should be stressed that Wight, Shaw, Falk and the rest are not Holocaust Deniers. On the contrary, they think it is the worst crime ever perpetrated. But what they share with Zundel and Zaki is the idea that any political campaign that aims to significantly change the way Israel is viewed in the West must cut the link between the Holocaust, Israel and the Jews. Instead of denying that the Holocaust took place, it is instead appropriated for anti-Zionist purposes. In this way of thinking, Europe’s outstanding moral debt from the Holocaust is to the Palestinians, not to the Jews, who, having abandoned the universalism that so failed to protect Europe’s Jews from the Nazis, should not expect any special protection from Europe as a consequence of Hitler’s genocide.

So much for the theory. What impact does all this have?

Despite the fantasies of British anti-Zionists that they are contributing to the Palestinian struggle, anti-Israel activity has a much greater impact in Britain than it ever will in the Middle East. The unprecedented number of antisemitic incidents in Britain during the Gaza conflict has been widely reported. Less tangible, but in some ways more worrying, is the growing sense of vulnerability felt by many British Jews. There are lots of people in Britain who express their hatred for Israel by attacking Jews. And before anyone suggests that Jews should therefore, as a defensive measure, distance themselves from Israel: the attackers don’t stop first to ask their victim what they think of Gaza, or Olmert, or the occupation. The answer to antisemitism is not to tell Jews to change their behaviour.

The greater the hatred for Israel, the greater the hatred for Jews; and nobody is more deserving of hatred than Nazis. In our post-Holocaust, human rights world, it is generally considered a good thing to hate Nazis, who, by their morals and values, stand outside and in opposition to mainstream society. Efforts are made to deny them platforms, disrupt their activities and even attack them physically. If Israel is a Nazi state, then anybody who does not oppose Israel is morally no better than a Nazi. There is only one place this train of thought can end: with the demonisation and social isolation of the vast majority of ordinary British Jews.

It means that when mainstream Jewish community leadership bodies organise a rally with the slogan, “Stop Hamas Terror: Peace for the people of Israel and Gaza”, and launch a Jewish community fundraising campaign for hospitals in both Gaza and Israel during the fighting, Richard Seymour accuses them of “cheerleading the massacre” and concludes that anybody who goes on the rally “ought to be shunned, and treated as the moral and political degenerates that they are.” It means that a research paper published by the School of Oriental and African Studies to investigate “legal aspects of economic and trade issues arising from Israel’s occupation of the OPTs” lists the names, addresses and contact details of kosher food shops in London and Manchester.

Once the central argument of anti-Israel campaigning in this country is that Israel is Nazi Germany, then this is no longer an anti-Zionist movement: it is an antisemitic one, with an antisemitic politics as its driving force.