Reports are coming in that Christopher Hitchens stood up to pro-Syrian Lebanese fascists while in Beirut– and got his ass kicked for it.

After writing “Fuck the SSNP” on a poster of the Syrian Social Nationalist Party (aka the Syrian Nationalist Social Party), he was accosted and beaten by SSNP thugs.

At Forbes.com, another journalist who was in Beirut with Hitchens writes:

On our way to a meeting with Minister of State Nassib Lahoud, Hitchens showed me the gashed knuckles and bruises suffered during the punch up. The attackers had apparently come out of nowhere on posh Hamra Street, where they had gone to buy shoes. “I was on the ground,” Hitchens said, “and getting it in the head.” It was a miracle they didn’t pull Kalashnikovs.

According to the Anti-Defamation League:

Lebanese authorities raided the homes of SSNP members on December 20, 2006, and confiscated large amounts of bomb making materials and weapons, including 200 kilograms of TNT, detonators, timers, mortars and anti-tank missiles.

The raids reportedly were part of an ongoing investigation into a series of assassination attempts in the country. Since the assassination of former Lebanese Prime Minister Rafik Hariri in February 2005, there have been more than a dozen assassinations and assassination attempts in Lebanon against public figures that oppose Syrian influence in the county, including the killing of cabinet minister Pierre Gemayel in November.
…..
SSNP, also known by its French name, Parti Populaire Syrien (PPS), was founded in 1932 by Antoun Saadeh. Its stated goal is to unite all lands of what is known as the Fertile Crescent into a single political entity, including territories in today’s Syria, Israel, Jordan, Lebanon, southeastern Turkey, Iraq and Cyprus. Its ideology, structure and symbols are influenced by the European fascist movements and regimes of the 1930s. While it has adopted some communist elements over the years, Saadeh’s ultra-nationalist ideas remain the ideological focus of the movement.

The SSNP flag, which I assume appeared on the poster Hitchens decorated, looks rather, um, derivative: 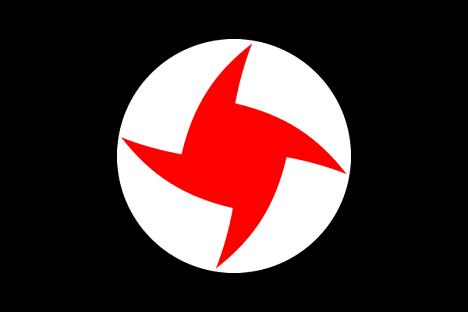 Anyone with an anti-fascist bone in his or her body would have no trouble recognizing the SSNP for what it is.

Coincidentally or not, Hitchens’s old nemesis, George Galloway, addressed a 2006 celebration in Canada commemorating the 74th anniversary of the founding of– yes– the Syrian Social Nationalist Party.

So once again we gaze in bewilderment upon a world in which someone who confronted and physically fought fascists is routinely accused of selling out to the Right, while someone who celebrated with their Canadian fellow fascists is viewed by some as a hero of the Left.