Ian Buruma wrote a thought provoking article in the Guardian about anti-Semitism in East Asia a couple of days ago:

So what explains the remarkable appeal of Jewish conspiracy theories in Asia? The answer must be partly political. Conspiracy theories thrive in relatively closed societies, where free access to news is limited and freedom of enquiry curtailed. Japan is no longer such a closed society, yet even people with a short history of democracy are prone to believe that they are victims of unseen forces. Precisely because Jews are relatively unknown, therefore mysterious, and in some way associated with the west, they become an obvious fixture of anti-western paranoia.

Such paranoia is widespread in Asia, where almost every country was at the mercy of western powers for several hundred years. Japan was never formally colonised, but it, too, felt the west’s dominance, at least since the 1850s, when American ships laden with heavy guns forced the country to open its borders on western terms.

Whether Buruma is correct about the apparent popularity of or rationale for the phenomenon of Jewish conspiracy theories in East Asian countries is a moot point, but it may explain the item in my shopping basket pictured below.

It’s a form of dried fungus I use in a recipe for Cantonese rice in case you were wondering. 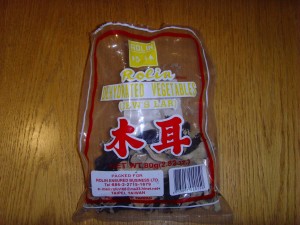