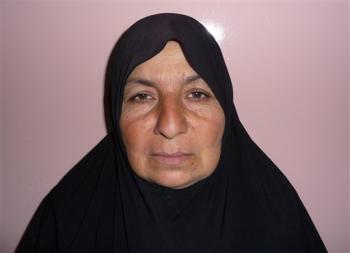 This is Samira Ahmed Jassim, a banal looking woman from Iraq. She has been arrested for recruiting female suicide bombers:

In a separate prison interview with The Associated Press, with interrogators nearby, the woman said she was part of a plot in which young women were raped and then sent to her for matronly advice. She said she would try to persuade the victims to become suicide bombers as their only escape from the shame and to reclaim their honor.
[…]
She said her first assignment was Um Hoda, a nickname meaning mother of Hoda.

“I talked to her a number of times,” said Jassim, who has four daughters and two sons. “I went back to them and gave them the details on her. And they told me, bring her to us. … And I took her to the police station, and that’s where she blew herself up.”

Another woman, whom she called Amal, was involved in long conversations, Jassim said.

“I talked to her many times, sat with her, and she was very depressed,” she said on the video. “I took her to them, and then went back for her and she blew herself up.”

Isn’t this a clear case of the perpetrator of an atrocity being a victim? In addition, the suicide bombings carried out by these women may have been religiously motivated by those who arrranged them, but for the women themselves the motivation was the cultural pressures of shame and dishonour being used as blackmail against them. People like Pilger might also wish to reflect on whether a resistance that includes people like Samira Ahmed Jassim are people one should “depend” on.