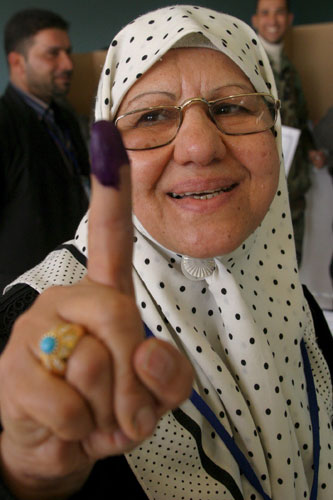 This is the second Iraqi woman to feature on Harry’s Place. This time it is not a dealer in death, but a symbol of hope for a better future in Iraq and the surrounding region. The Iraqi elections have been carried in a largely peaceful manner. William Shawcross writes.

All the Islamic parties lost ground, especially that associated with the so-called ‘Shia firebrand’, Moqtada al-Sadr, whose share of the vote went down from 11% to 3%. The principal Sunni Islamic party, the Islamic Party of Iraq, was wiped out.

Instead, a new generation of Iraqi politicians is coming forward. Many of them are young and secular. They have lived always in Iraq, not in exile; they are Iraqis with local roots first and foremost – they are not pan-Arabs or pan-Islamists. Nor do they have connections to the US.

This is not a surprise. Iraqis have become increasingly alienated from religious extremists. Data from before the US troop surge started showed their desire for a secular government.

Overall, only 18 percent of those surveyed in October 2006 thought that having an Islamic government where religious authorities have absolute power is “very good,” compared with 26 percent surveyed in December 2004.

About a third of those surveyed in March 2007 strongly agreed that Iraq would be a better place if religion and politics were separated, compared with 24 percent in December 2004.

Additionally, Moaddel found a significant increase from April 2006 to October 2006 in the percent of Iraqis who gave six religious political parties a very unfavorable rating.

Therefore concern that the invasion of Iraq has led to a counterproductive surge in support for extremist Islam is unfounded. Indeed, it is quite the opposite. There have been falls in support for Al Qaeda, and Iraq is perhaps still a sign that spreading democracy is not a doomed project. Max Dunbar writes:

This suggests that widespread democracy in the Arab world would not constitute, as Sam Harris claimed, a ‘gangplank to theocracy’. One could even extrapolate the view that most Middle Eastern Muslims do not want to live under a theocratic regime: a view also borne out by the substantial migration from Islamic to secular countries.

One thing is clear: the parties of God lost one today.

Which why I think Shabba Goy’s recent contribution to this site:

In short, the cold-war ‘our son of a bitch’ approach, is, on occasions, a short-term necessity. The neo-conservative, liberal internationalist hope of a democratic revolution in the Middle East and wider Muslim world, remains a hope, but nothing more.