Comparisons of this sort are usually odious, but they’re unavoidable.

The parallels between Sri Lanka and the Tamil Tigers, Israel and Hamas, are not precise by any means. But at heart, both are terrible regional conflicts between cultural groups, where both have involved tragic misjudgements, whose leaders have, at times, behaved in an appalling fashion, and all of whose representatives claim some degree of electoral legitimacy.

However, whereas the Sri Lanka/Tamil Tigers war has barely made the front page, the Israel/Hamas conflict has attained mythic – almost Biblical – proportions in this country.

Let’s go through a few of the similarities.

– British colonial legacy: both Israel and Sri Lanka won their independence from Britain in 1948

– UK response: The Prime Minister called for a ceasefire in both conflicts.

– Elections: The Tamil Tiger’s party, the Tamil National Alliance – which seeks Tamil autonomy – won 22 seats, in Tamil majority areas, in 2004. Hamas won the Palestinan Authority parliamentary elections in 2006, but broke off power sharing negotiations with the executive in order to mount a coup.

– Civilians: civilians have been caught up in the fighting, with the Tamil Tigers and Hamas both accused of sheltering behind them, and with both Sri Lanka and Israel accused of indifference to their fate

– United Nations: the UN has complained about shelling of their buildings.

– Aid agencies: have described the situation in Sri Lanka as “nightmarish”

– Journalists: were excluded from Gaza by Israel, and have been threatened with expulsion by Sri Lanka and boycottt by Hamas supporters.

– Marches: There have been large marches in support of both Palestinians and Tamils. This is the Guardian’s coverage of the Tamil  march. 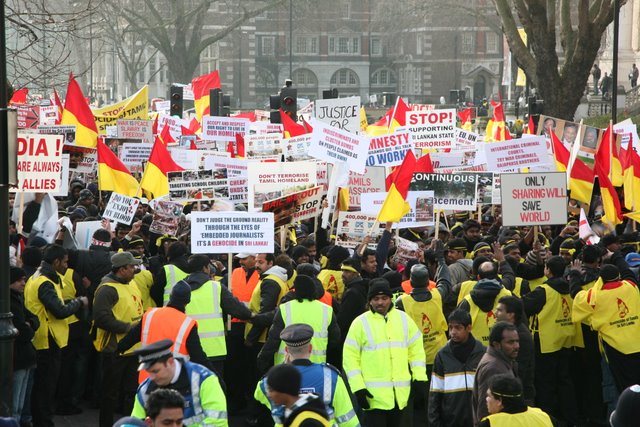 (No swastikas on display – but then in this context, it might be confusing)

In relation to the Tamil Tigers, the following has not happened:

– Tamil solidarity politics in Britain is virtually non existent, outside the Tamil community.

– The plight of the Tamils does not appear to have any resonance for members of extreme Left parties – although Liam McUaid has reprinted a pro-Tamil site’s account of the march.

– There has been no talk of a Buddhist/Sri Lankan conspiracy, that holds the world in its supernatural grip.

– Politicans like the Sri Lankan born Tory MEP Nirj Deva – who have backed the Sri Lankan government have not been subject to vilification on the basis of his ethnicity.

– Race or religious based slurs have been absent from what little popular debate there has been on Sri Lanka.

– There have been no attacks by Tamil sympathisers on Buddhists and their property on the streets of London.

Why do you think this is?