Here is a poster for a fundraiser by the Ummah Welfare Trust: “Stop the Seige [sic] in Gaza” 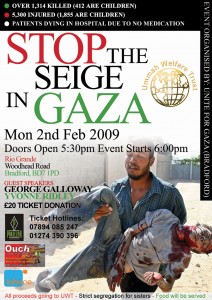 The Ummah Welfare Trust works through the Alsalah Islamic Association Gaza Governates, which has been designated by the US Treasury as a financer of Hamas. Hamas regards the ‘charitable network’ of which Alsalah forms a part, as follows:

“We see it more as a means of extending the life span of the intifada.” 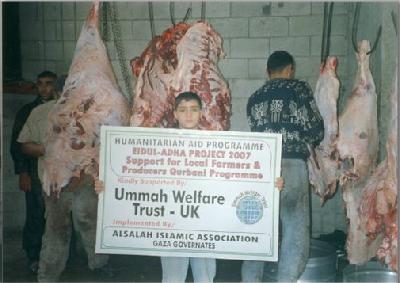 This is what Hamas does with aid, from organisations that are not linked to it:

Hamas on Monday raided some 100 aid trucks that Israel had allowed into Gaza, stole their contents and sold them to the highest bidders.

And this is how Hamas uses aid from groups that  are linked to it:

Bearded Hamas leaders on Friday delivered an envelope with five crisp $100 bills to a veiled woman whose house was damaged during Israel’s invasion of Gaza, the first of promised relief payments by the militant group.

In another part of the territory, a bulldozer cleared rubble and filled in a bomb crater where a week before a top Hamas leader had been killed in an Israeli air strike.

Since a truce took hold this week, ending Israel’s three-week onslaught, Gaza’s Hamas rulers have declared victory and gone out of their way to show they are in control.

They have pledged $52 million of their own funds to help repair lives, the money divvied up by category. The veiled woman received compensation for her two-story home in the northern town of Beit Lahiya.

Hamas, believed to be funded by donations from the Muslim world and Iran, has promised $52 million in emergency relief. This would include $1,300 for a death in the family, $650 for an injury, $5,200 for a destroyed house and $2,600 for a damaged house, he said, adding that these are not yet compensation payments, which Hamas promises will follow.

The poster announces that there will be “strict segregation for sisters”.

The event is sponsored by a company called Ouch Compensation Ltd:

“Had an accident in the last 3 years? Win or lose, you pay nothing”

However, the cost of Hamas’ misrule to Palestine and Israel has been high, indeed.