Here’s a sticker that caught my eye on the way into work this morning. 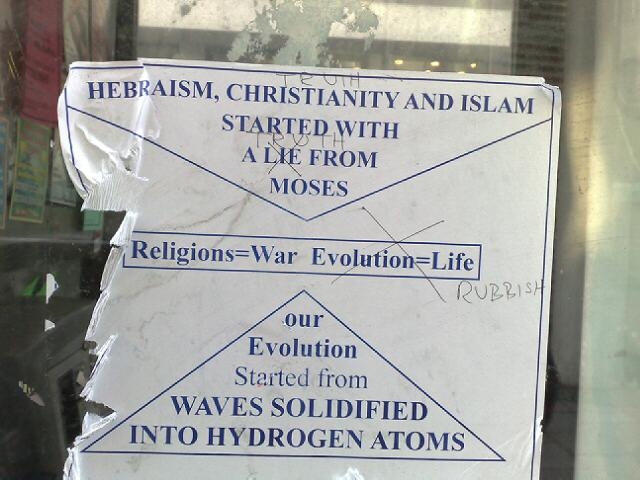 A lie from Moses? I’m not sure I’d put it that high. The man was working with limited data, and came up with what must have seemed to be a pretty plausible theory, at the time. Aristotle didn’t do that much better. And at least Genesis gets the evolution of life in roughly the right order.

And, although there are most certainly religious wars, Hitchens’ thesis is at its most Procrustean, when he tries to depict fascism and communism as forms of religious belief.

Did waves really solidify into hydrogen atoms? No, they did not.

Nevertheless, Evolution is life, and I like that sentiment.

These stickers have also appeared in Rome. What can it all be about?

You are part of a Plan and you don’t even know it.

Before the next events of war and terror will contribute to add more distractions into an already confused situation,

Now you should pay your highest attention.

Look at how Humankind is been pushed toward a precise Direction by only few people (including Head of States) who are in agreement to share a hidden Plan.

Look at what is happening while the rest of the people have nothing to believe in, nothing that unites them and no alternative beyond the only choice imposed by

A change of Direction could not simply occur by telling the people that the Zionists are intentionally leading Humankind into great destructions and toward slavery.

Really? So what? What else can we do? They ask.

There is a solution, but is not so simple.

Remember the recent “surprises” and the “failed” wars.

These are not individual events.

The War in Iraq

All these events are part of the Zionist Plan called

The worsening of the late financial crisis

will lead into the Last World War

The cause is from this famed Plan from

The Plan of the Zionists Freemasons is clear, written and defined.

The next startling “surprises” will unveil this Plan

I hope that You will understand before it is too late.

The Obama government will soon be boycotted and

Their Plan follows the exact footprints

“The Protocols of the Elders of Zion”

(one copy held in the British Museum)

“Our countersign is – Force and Make-believe. Violence must be the principle,

to lay down their crowns at the feet of agents of some new power.”

There is a solution and a Plan to oppose the Zionists

although it is important to understand who is behind all this.

Oh. That’s what it is all about, then.