Here is DeeDee Guttenplan in the Guardian:

I remember writing privately to the leaders of Stop the War expressing discomfort over signs equating the Star of David with the swastika and headbands glorifying suicide bombing, and getting an extremely hostile (and self-righteous) response for my trouble. Which didn’t stop me from turning out on the streets.
…
During the Spanish civil war the American poet Archibald MacLeish was attacked by Trotskyists for his willingness to support a democratically elected Spanish government led by communists, and dependent on the Soviet Union for arms. MacLeish replied:

“The man who refuses to defend his convictions, for fear he may defend them in the wrong company, has no convictions.”

DeeDee could have demonstrated the strength of his convictions by marching with these demonstrators, yesterday, in Melbourne: 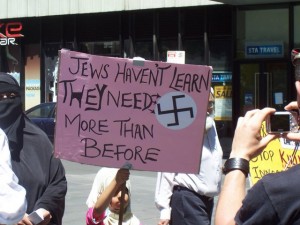 Or, had he taken a trip to Calgary, he could have joined with the the Aryan Guard, who appear for some reason to have developed an affection for Hamas: 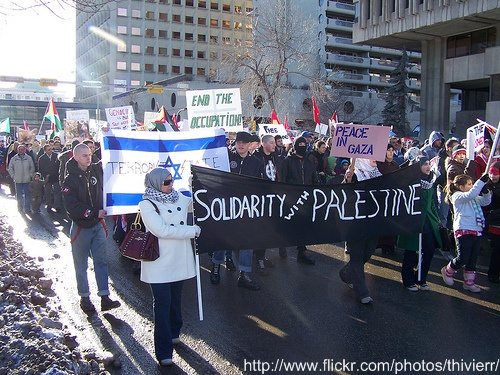 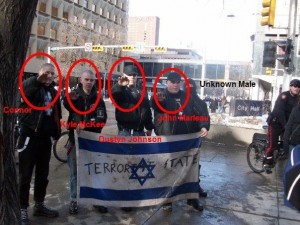 Event organizer Shadi Abuid—who last made news a few years back as a university student when he brought to Calgary Norman Finkelstein, the popular anti-Israel author of “The Holocaust Industry”—told Canwest Global he was impressed with the “various groups uniting under one voice.” He explained that he had “directly told” the neo-Nazis that he’d prefer they didn’t join the march. “But in these demonstrations you can control the crowd but you can’t control the emotions . . . you can’t deny people’s right to walk,” he shrugged.

That’s true. Except, many of the same organizers behind Saturday’s march attempted to deny the freedom-to-demonstrate of an Israeli supporter just the other week. At a protest in front of Prime Minister Stephen Harper’s constituency office in southwest Calgary January 2nd, Gazan supporters called the cops to complain when one man showed up waving an Israeli flag. There were 150 pro-Palestinian protestors, but the single Israeli supporter was told by police that he must leave or be charged with “inciting civil disorder,” according to this account (with photos). Protestors reportedly cursed at and threw shoes at the man.

Finally, on a connected subject, and without spoiling it by googling, who said this:

I have long raged against any comparisons with the Second World War – whether of the Arafat-is-Hitler variety once deployed by Menachem Begin or of the anti-war-demonstrators-are-1930s-appeasers, most recently used by George Bush and Lord Blair of Kut al-Amara. And pro-Palestinian marchers should think twice before they start waffling about genocide when the Grand Mufti of Jerusalem once shook Hitler’s hand and said – in Berlin on 2 November 1943, to be precise – “The Germans know how to get rid of the Jews… They have definitely solved the Jewish problem.” The Grand Mufti, it need hardly be added, was a Palestinian. He lies today in a shabby grave about two miles from my Beirut home.

No, the real reason why “Gaza-Genocide” is a dangerous parallel is because it is not true. Gaza’s one and a half million refugees are treated outrageously enough, but they are not being herded into gas chambers or forced on death marches. That the Israeli army is a rabble is not in question – though I was amused to read one of Newsweek’s regular correspondents calling it “splendid” last week – but that does not mean they are all war criminals. The issue, surely, is that war crimes do appear to have been committed in Gaza. Firing at UN schools is a criminal act. It breaks every International Red Cross protocol. There is no excuse for the killing of so many women and children.

(Via Norm and Tim Blair) 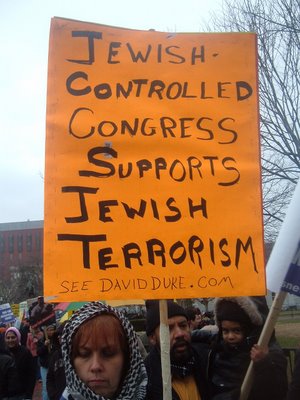