There couldn’t have been a clearer contrast between yesterday’s Rally for Hamas and today’s event for peace in both Israel and Gaza. 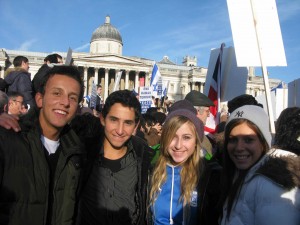 In place of the racist posters, callibrated to taunt Jews with their mass murder at the hands of the Nazis, we had posters calling for Peace for the People of Israel and Gaza. Some people had made their own posters. They said things like this: 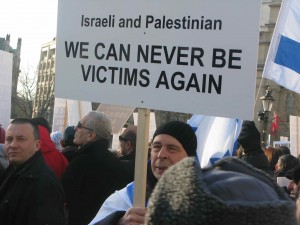 Trafalgar Square was full to capacity: a sea of British and Israeli flags, and placards calling for an end to terrorism and demanding peace for the people of the two nations. 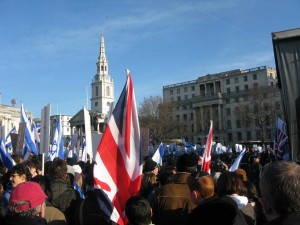 I bumped into many friends, including Theresa Villiers, the Shadow Secretary of State for Transport. 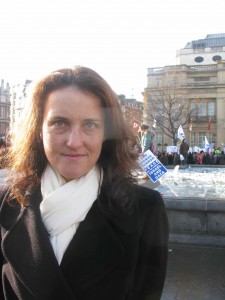 A Lubavitcher turned up with a bunch of tefilin, and circulated in the crowd trying to get them to tie the little boxes to his head. When asked, I politely declined. I mean, it is a little silly, isn’t it? 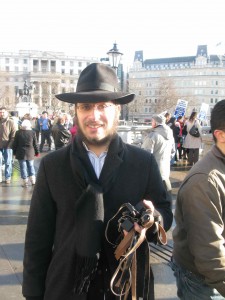 Some of the Hamas supporters who frequent this blog have suggested that the neo Nazi British National Party would turn up to this march. They’ll suggest that the presence of this country’s flag, the Union Jack, is evidence that they were there.

Well, I made a point of chatting to those with Union Jacks, and asking them if they were BNP members or supporters. This is what they had to say: 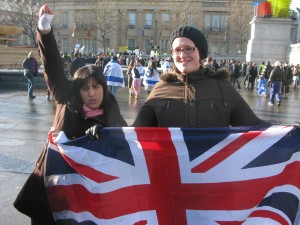 “They say WHAT? But we fight against the BNP!” 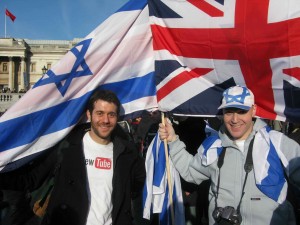 “We took both flags to the demonstration, because we’re proud to be British and proud to be Jewish” 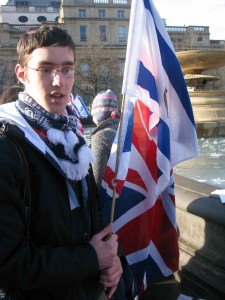 “The BNP have no right to our Union Jack. We’re taking it back.”

So, how were things on the pro-Hamas counter demonstration? Small, noisy, and fanatical, if the truth be told. 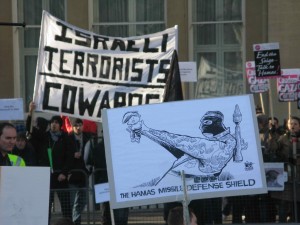 Again, I’m not being entirely fair when I call it a pro-Hamas demonstration. Hizbullah supporters were also proudly waving their flags and banners: 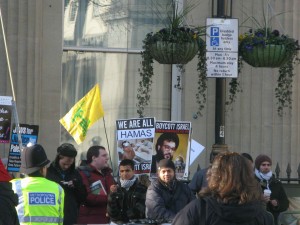 Note Jews for Justice for Palestinians, standing literally shoulder to shoulder with the supporters of not one but two theocratic terrorist groups. 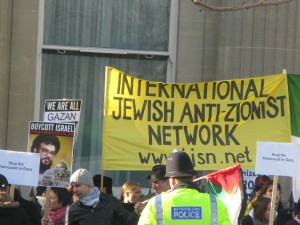 And the newly formed International Jewish Anti-Zionist Network (aka Messrs Rance and Greenstein), right next to a demonstrator with their pro-Hezbollah placard.

And while the jihadists and communists chanted their message of hate at our demonstration, the crowd chanted back: