This looks like the kind of demonstration I could get behind. 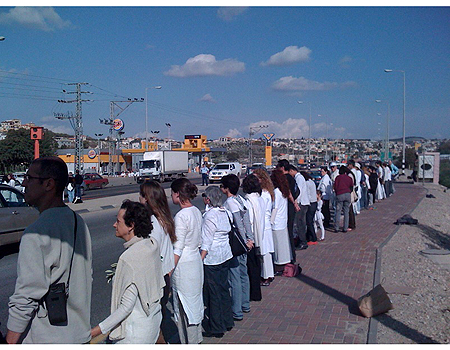 Hundreds of Jews and Arabs from the north and center of Israel gathered near Kfar Kara’a on Highway 65 Saturday in a rally for peace. The only sign present at the demonstration read “Hand in hand – neighbors for peace”.

Guy, a resident of Maccabim who participated in the rally, told Ynet he had learned of the event through a widely distributed email.

“It’s an Arab-Jewish initiative intended to boost coexistence between us in Israel, these days especially,” he said.

Those present stressed that they were not for or against the military operation in Gaza. They wore white and held hands to create a human chain along the road for one hour, without disrupting traffic. The demonstration was declared a success and organizers said they would hold a similar one next Saturday.