The image that came almost to define Obama’s campaign has found a home. The red, white and blue portrait of US President-elect Barack Obama, created by Los Angeles-based street artist Shepard Fairey, will become part of the permanent collection at the US National Portrait Gallery. 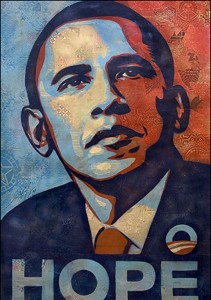 The BBC reports that curators at the Smithsonian Institution museum plan to hang it by Inauguration Day on January 20.

“What I think is so fascinating is the ubiquitous nature,” said Carolyn Carr, deputy director of the Portrait Gallery. “When people think of a portrait of Obama, they think of this image.”

Now Mr President elect tell us what you think about Gaza.