One: In 1960 Che Guevara visited the Soviet Union, China and North Korea. He said North Korea was the country that impressed him “the most.”

Two: From the Korean Central News Agency of the Democratic People’s Republic of Korea:

Pyongyang, July 4 (KCNA) — Carlos Lage Davila, member of the Political Bureau of the C.C., Communist Party of Cuba and vice-president of the Cuban Council of State, met and had a talk with the delegation of the DPRK Foreign Ministry led by Vice-Minister Kim Hyong Jun on a visit to Cuba at the building of the Council of State on June 30.

At the talk, the vice-president expressed heartfelt thanks to General Secretary Kim Jong Il for showing deep care for the health of Fidel Castro Ruz and rendering full support to Raul Castro Ruz.

The friendly relations between Cuba and the DPRK are growing stronger day by day under the care of the leaders of the two countries, he said, stressing that the Cuban people will always stand by the Korean people in the struggle for socialism against the U.S. imperialists.

Three: In retirement, with time on his hands, Fidel Castro fondly recalls his 1986 visit to North Korea and his meeting with the “illustrious” Great Leader.

Four: From a must-read article in Thursday’s Washington Post:

In Camp No. 14, the North Korean political prison where Shin Dong-hyuk was born and where he says he watched the hanging of his mother, inmates never saw a picture of Kim Jong Il.

“I had no idea who he is,” Shin said, referring to the leader whose photograph is displayed nearly everywhere in North Korea.

Inmates did not need to know the face of their “Dear Leader,” as Kim is called. Behind electrified fences, they tended pigs, tanned leather, collected firewood and labored in mines until they died or were executed.

The exception is Shin, who is 26 and lives in a small rented room here in Seoul. He is a thin, short, shy man, with quick, wary eyes, a baby face, and sinewy arms bowed from childhood labor. There are burn scars on his back and left arm from where he was tortured by fire at age 14, when he was unable to explain why his soon-to-be-hanged mother had tried to escape. The middle finger of his right hand is cut off at the first knuckle, punishment for accidentally dropping a sewing machine in the garment factory at his camp.
…..
The U.S. government and human rights groups estimate that 150,000 to 200,000 people are now being held in the North’s prison camps. Many of the camps can be seen in satellite images, but North Korea denies their existence.

Next year, 2009, is going to be a year of many anniversaries that will be politically contested.

In particular it is the 20th anniversary of the fall of the Berlin wall, and the fiftieth anniversary of the Cuban revolution. We can expect that both of these anniversaries will be used as a pretext for the usual suspects to rehash the arguments about the failures of socialism, often based upon misinformation and prejudice.

Undoubtedly. But please, Andy, don’t tell me that it’s possible for the same person to celebrate both anniversaries.

In the case of the still living Cuban revolution, we have an example of a highly successful socialist government that has now survived for five decades, in the face of trade blockade, and economic, diplomatic, and at times even military sabotage from the USA.

The left in Britain and internationally have an important responsibility to celebrate the Cuban revolution in the anniversary year, and popularise its achievements.

What is more, celebrating Cuban culture isn’t hard work! There will be a series of events throughout the year, supported by the trade unions. To advertise one example, our friends at Philosophy Football have arranged a new year party for 2nd January, in association with The Fire Brigades Union and Thompson’s Solicitors and supported by Cuba Solidarity Campaign and Red Pepper. 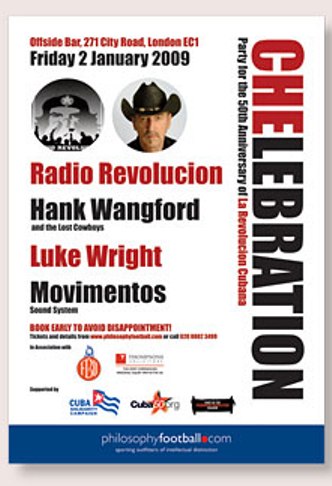