Richard Seymour – author of the best selling ‘Liberal Defence of Murder‘ – has produced a masterful post on the terrible terrorist attacks in Mumbai. The post consists of a well researched overview of the attacks: the likely background of the group involved, their connection with other Islamist groups, the government’s treatment of these groups, and of intercommunal militancy in India in general.

We know, of course, that many tourists from Europe and America have been taken hostage. And Lenin has a little to say about that:

One analysis in the Telegraph explains that the symbolic significance of the attack on the Taj Mahal hotel is that it was built to give the Indian upper class somewhere decent to stay in an age of colonial racism and segregation. The hotel is now “a symbol of Western decadence”, because of the rich tourists it attracts. Similarly, the train station attacked was a terminus busy with tourists. Unlike the attacks in 2006, which were designed to exact maximum casualties among Hindu civilians, this attack seems to have been designed to kill foreigners.

But there is one strange omission from Lenin’s analysis.

Why did the terrorists specifically target a Jewish centre – a target that, even as I type, is being liberated?

I have to admit, I was a little embarrassed to write about this, particularly as the terrible events were in the process of unfolding. Over a hundred dead, passengers peppered with machine gun fire at the train station, tourists held hostage – I really didn’t want to point out that there were some Jews in danger as well. Even when one of Harry’s Place readers – who is not Jewish – prompted me to write about the selection of Jews by these terrorists, I brushed the request off.

But now that Lenin has utterly failed to tackle the subject, I’m moved to write.

Can Lenin’s philosophy explain how it is that an Indian Islamist group, in a country many many miles away from the Middle East, plagued by inter-communal struggles that have nothing at all to do with Jews, select Jews as a target.

Seriously, Lenin – where does this fit in to your world view? Did you not notice this feature of the terrorist attacks? Did you notice it, but think it not worthy of mention, a random act without explanation?

I think Lenin is embarrassed by the terrorists’ decision to turn their guns on Jews. Because when Jews are selected for murder and kidnap, within Israel and outside Israel, by Hezbollah and the other Middle Eastern terrorist groups who kill Jews, and which Lenin supports and glorifies, he is quite happy to explain their actions in terms of ‘anti-imperialism’ or ‘fighting against apartheid’.

But can Lenin explain to me how that rationale applies in Mumbai? It doesn’t does it?

If Lenin admitted that Islamist terrorists in Mumbai were driven, not simply by the dynamics of inter-communal politics in India, and the repression of Islamists by the Indian Government, but by a psychotic and deep seated racist, genocidal, and religiously-expressed desire to attack Jews and specifically Jews, then what would this say for his support of Hamas and Hezbollah?

So, instead of considering the selection of Jews head on, Lenin ignores it.

What a courageous man.

Although Richard Seymour may not have a clue about the Jewish angle to the Mumbai attacks, there’s somebody who does.

Paul in the comments draws our attention to the website of the Muslim Brotherhood, and the following piece by Amaresh Misra:

Some Hindu Gujaratis of the Nariman area spoke live on several TV channels–they openly said that the firing by terrorists began from Nariman house. And that for two years suspicious activities were going on in this house. But no one took notice.

Our worst fears have come true. It is clear that Mossad is involved in the whole affair. An entire city has been attacked by Mossad and probably units of mercenaries. It is not possible for one single organization to plan and execute such a sophisticated operation. It is clear that this operation was backed by communal forces from within the Indian State. The Home Minister Shivraj Patil should resign. The RSS-BJP-VHP-Bajrang Dal should be banned. Advani and others ought to be arrested. Today is a day of shame for all Indians and all Hindus. Muslims and secular Hindus have been proven right. RSS type forces and Israel are all involved in not only destabilizing but finishing India. India should immediately snap all relations with Israel.

Lenin’s party, the Socialist Workers Party, supports Hamas/Muslim Brotherhood, and sits alongside them at the yearly Cairo Conference.

One of Lenin’s commentators, “kenoma“, is also thinking along conspiracist lines:

This isn’t confined to Mumbai’s communal politics though: the aim is clearly to pin this on Pakistan the ISI, while at the same time kickstarting the GWOT/ Al Qaeda hype again. So we have the drama of the western hostages, the main event according to the Western media, and in particular the drama around the Chabad Lubavitch centre especially, from which the hostages seem to have been released: but these Muslim fanatics show a curious clemency towards their Western and Jewish captives, while killing Mumbaikers more or less indiscriminately. This part of the spectacle, meant for international consumption, can’t have been coordinated by the Indians alone. 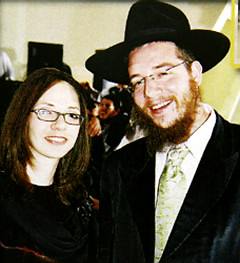 This is like the Munich Olympics, and Lenin has missed it.