One of the worst mistakes the state of Israel ever made was to allow, and even encourage, Israelis to settle in the territories captured in the 1967 war. Fortunately the settlements in the Sinai and Gaza are gone. But those in the West Bank remain. Some of those settlements are now part of Jerusalem and could remain part of Israel as part of a territorial swap in a final settlement. But at least one settlement– a constant source of strife for both Palestinians and Israeli soldiers and police– ought to be evacuated without delay.

That settlement is in Hebron, where about 600 religiously-motivated Jews– convinced they have a God-given right to be there– live in an enclave in the heart of a city of 180,000 Palestinians. The settlement should have been evacuated in 1994 after the settler Baruch Goldstein massacred 29 Palestinians praying at the Tomb of the Patriarchs in Hebron. It would have been evacuated if Yasser Arafat had agreed in 2000 to accept a Palestinian state in the West Bank and Gaza.

But the settlement remains and in recent days it has again become a source of violent friction after the Israeli High Court ordered some of the settlers to vacate a house for which the ownership is in question, Haaretz reported.

As sometimes happens in Hebron, settlers showed their gratitude to the Israeli soldiers and police who protect their settlement by assaulting them.

A group of Israeli teens in Hebron on Saturday attacked Border Patrol officers outside the city’s police station.

The police were setting out for a patrol of the city when they were set upon by the youths, who had come to the station after one of their friends was arrested on suspicion of assaulting a police officer.

One of the teens was arrested and has been taken for questioning.

Security forces sent reinforcements to Hebron in preparation for the arrival this weekend of some 20,000 Jews for an annual pilgrimage.

The pilgrimage commemorates the death of the Matriarch Sarah, whom the Bible says was buried in Hebron.

On Saturday, Deputy Defense Minister Matan Vilnai called on settlers to rein in the violence between members of their community and Israeli police and security forces in the West Bank.

“A law is a law. These instances will not be tolerated, not against IDF soldiers, the police, or Palestinian civilians,” Vilnai said, during a meeting with Jezreel Valley residents.

Vilnai added “it’s true that we are speaking about a handful of lawbreakers which are blemishing the entire settler community. But the leadership also has responsibilities. This is a dangerous situation facing security forces.”

On Thursday, angry settlers attacked Israel Defense Forces soldiers, vandalized Palestinian property and scrawled “Mohammed is a pig” on a local mosque after the High Court of Justice ruled earlier this week that the house must be cleared of its Jewish residents until another court decides whether Jews or Palestinians are the legal owners.

In one incident, settlers poured turpentine on an Israeli soldier trying to stop them from throwing stones at Palestinians.

Israeli soldiers painted over the graffiti on the mosque. 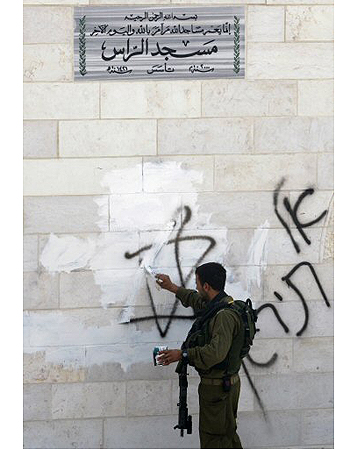 Get them out of there now.

Last month, an extremist settler in the West Bank city of Hebron publicly and explicitly urged terrorism against Israeli soldiers. Another told Army Radio that the troops – who guard the settlers from the Palestinians who surround them – should be kidnapped or killed.