A perceptive observation by the Venezuelan cartoonist Eduardo Sanabria (EDO): 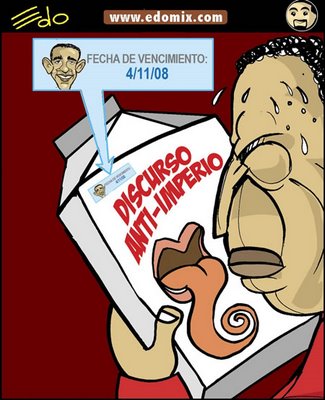 Hugo Chavez is holding a carton labeled “Anti-Imperialist Talk.” The small sticker says “Expiration Date 4/11/08”– which was, of course, the date Barack Obama was elected president.

While Obama may be willing to meet with Chavez, the Venezuelan leader is unlikely to derive much comfort from what he has to say. Speaking of Chavez, Obama told an audience last May:

His predictable yet perilous mix of anti-American rhetoric, authoritarian government, and checkbook diplomacy offers the same false promise as the tried and failed ideologies of the past.

And there are signs that the Iranian regime is nervous about the prospect of actually having to negotiate with an Obama administration, The Washington Post reports:

For Iran’s leaders, the only state of affairs worse than poor relations with the United States may be improved relations.