On 5 March, 2003, Hamas sent a suicide bomber onto Egged Bus No 37 in Haifa. Seventeen young people were slaughtered. It was a deliberate act, calculated to kill Jew, Arab and Christian indiscriminately.

One of the children murdered by Hamas was Asaf Zur.

This is his father.

Asaf was almost seventeen years old when he died and he is my son.

As every young man does, Asaf would have finished high school and service and would have gone on a trip to see the world south America, the far east, India or maybe Australia and New Zealand. He wanted very much to go surfing at the famous beaches in Hawaii and Australia. Asaf wanted to hike the high treks of Nepal and the Himalayas.

Now I am sending Asaf to his world tour. Without a passport or a back pack, I am sending you only this picture and his spirit and ask you to help take Asaf to wherever you go. India, Thailand, New Zealand or the Chinese wall. Wherever you go, take out the picture, photo it in the place you are and email it back to me (Yossi@Blondi.co.il).

If you are not travelling take the photo in your city or town, at the mall, city stadium and even your front or back yard.

I will build Asaf’s world tour photo Album and post it on the internet. This way Asaf will be at all those wonderful places in the world he wasn’t lucky to see.

You can print a few copies of the attached picture and leave copies on your way, hang it on a bulletin board at the hotel or the guest house you stay in. leave it along the trek, put it in the visitor’s book you write your experience in.

Help me get my son around the world and make his world tour go through each country on the globe. 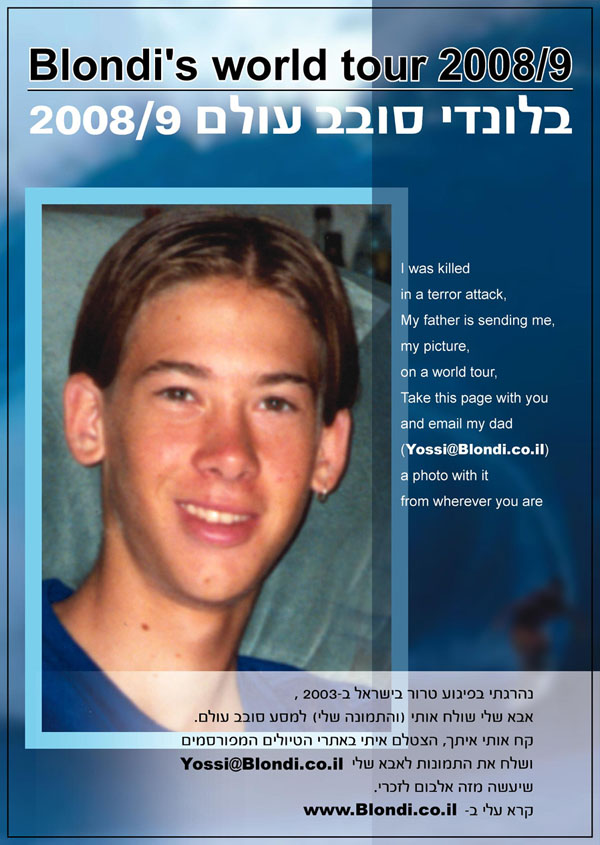