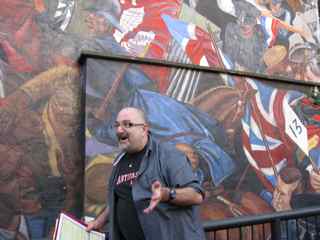 Late afternoon last Sunday – which was unbelievably warm and golden – a group of 35 or so Harry’s Place people and their sympathisers strolled companionably through the Radical Jewish East End on a tour led by East End Walks guide David Rosenberg.

We met at Gardiner’s Corner (Gardiners, like so much of the old East End, is no more) where an anti-fascist tram driver had marooned his tram to disrupt Oswald Mosley’s Blackshirts during the Battle of Cable Street, October 4th 1936. Above us was an assertive-looking wall-mounted Star of David held aloft by a couple of proud lions with cutlasses. It was the sign of the now-no-more Jewish Daily Post. I’ve been walking up and down Whitechapel High Street for years and never noticed that – that’s why you go on things like this with people like David.

We proceeded to Manningtree Street, former location of the Popular Cafe, local meeting spot and one of many communication points for the Battle. Here David sketched Mosley’s veering political development from Conservative, when at 21 he had been the youngest MP in the Commons, to the disaffection over Ireland which propelled him to stand as an Independent and – via the Fabians, the left of the Independent Labour Party, and his own imaginatively-named New Party – to found the British Union of Fascists in 1932. Despite early support from the Mirror and Daily Mail, in David’s assessment the BUF was defeated by Mosley’s inability to build support as well as its own reputation for thuggery and antisemitism. He noted the debate about whether the antisemitism was a central policy plank or something borne out of desperation. Naturally, Mosley denied any antisemitism – if he targetted Jews, he said, it was because of what they were doing rather than who they were.

Next we heard about the different communities living in the area in the early 1900s – English, Irish, Somali, Chinese and the 120,000  or so Eastern European Jews taking refuge from pogroms back home. David described the difficulties this new community experienced in getting the growing Fascist threat recognised by the more established and prosperous Jewish community which had set up its institutions further west. Since East End Jews couldn’t gain adequate representation in this establishment, they set up a number of specifically East End institutions including the Workers Circle and Jewish People’s Council (David told us the Jewish Chronicle eventually embedded a journalist after which the editorial line shifted somewhat but, along with the Labour Party, the Jewish Board of Deputies still advised staying home on October 4th – a recommendation which was widely ignored).

We sat on railway sleepers opposite dinky Fieldgate Street Synagogue which nestles up against the East London Mosque. Guests from a nearby wedding milled around – it was an exquisite evening, perhaps the last of the year. At this juncture David drew another of several books out of his bag (I think this one was ‘Our Flag Stays Red’) and introduced us to the radical Jewish East Ender Phil Piratin. Next was Tower House, former hostel where Stalin stayed in a tiny room while attending an important Russian Communist get-together. Then we went to look at Paragon Mansions where the Communists had managed to blow a hole in Fascist support by organising a highly disciplined, successful and historically important campaign for better housing conditions. We heard how Irish Catholic and Eastern European Jewish women, prominent in the campaign, cooperated on their day-to-day jobs to help each other meet their picket commitments during the rent strikes. Then we moved on to Nelson Street, location of the last synagogue to be built in the East End, and heard about young Charlie Goodman, arrested for shinning up a lampost to urge on the anti-Fascists and, later, veteran of the Spanish Civil War.

Coming to Cable Street we imagined the scene – the mattress barricades, overturned truck and swarms of Irish dockers, Jews and Communists shouting the Spanish Civil War slogan “No Pasaran” as they confronted the Blackshirts and their mounted police escort (brought down by marbles!). And they succeeded – the Fascists didn’t pass. We ended at Dave Binnington’s enormous mural of the Battle, literally and figuratively a riot of people, missiles, banners, chamberpots and their contents, trampling horses and cossack-like policemen.  Vandalised by the far right soon after completion in 1982, the mural now has a special easy-clean coating. Round the corner local fighters in the Spanish Civil War are commemorated by a fading plaque.

I’ve missed out a lot but David runs this tour regularly so you can go and see for yourself. My friends and I very much enjoyed the way he mixed historical account, vignette and undogmatic socialist commentary – the characters and their adventures, the connections he made between workers’ solidarity and anti-racism, the oppositions between newcomer and establishment, and the implicit debt of rememberance to those who fought Fascists at Cable Street and in Spain. Particularly impressive was his dignification by the Former Leader of Tower Hamlets Council in a drive-by shout of thanks (unrelated to his tours, but nevertheless).

The walk ended in balmy twilight and on David’s recommendation a good few of us went to eat at Aladin’s on Brick Lane. It was all fun.

You were missed – come with next time.