When I was a little boy, there was a programme on the BBC, which was the true forerunner to Big Brother. I don’t think it has ever been equalled. A number of families agreed to spend a year living as a (I think) an Iron Age community, in round houses. Basically, they went mad. It was compelling television. Somebody in the comments will remember what it was called.

Shortly after it was on, I was taken by my parents to the Iceni Village – a reconstruction of one of Boudica’s tribal settlements – not far from Grimes Graves. My recollection of the place is that it was utterly magic. It gave me a very real and immediate sense of life at the dawn of British history. It had a snake pit. It had a chariot. It had a little spring, from which you could drink ice cold water. Going to the Iceni Village was one of the key events of my childhood.

I made the mistake of going back there, last weekend. Here’s a picture which gives you some idea of what it was like. 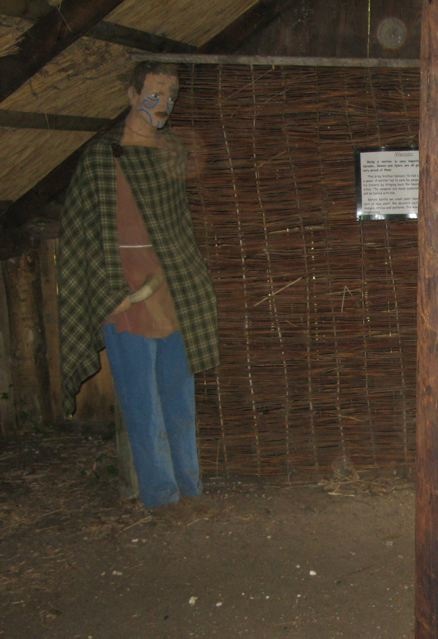 It was interesting to see how childhood perceptions can come sharply into focus as you age.

Anyhow, it was still fun to go. My son was clearly very struck by the green decapitated heads overhanging the gates, and by the fact that the children in the roundhouse seemed to be guarding the door: a task which he thought it was unfair to force children to perform.

There’s nothing wrong with a bit of childish fantasy.

Which brings me to Francis Pryor’s “Britain AD” series. First shown four years ago, it is a merrie jaunt through British ancient history. The only mention of it on the web suggests that the programme hinges around the quest for King Arthur. Great family viewing. There’s more though. Francis Pryor bemoans the scorn which is poured on archeologists who, like him, engage in delightful flights of fancy about the mystical, vaguely Tolkiensque world, he imagines our past to be:

In fact, the long-established, innate conservatism of the archaeological profession makes it extremely hazardous for any prehistorian to espouse ‘flaky’ theories or ideas that tend, however slightly, towards the crackpot.

But Francis isn’t constrained by such a reactionary attitude. You’ll remember him as the man who can build an entire civilization with a deep and compelling mythology, from a single shard of pot. Well, starting with a hearth inside a henge in Scotland, he reconstructs an entire obscured and forgotten national culture, involving a journey of a spirit from a wooden henge, down river, to Stonehenge, from where they enter heaven.

All this is pretty engaging speculation, and inoffensive enough. But there’s more to Francis Pryor than a little glib speculation about ancient funeral rites. He goes on to construct an all-encompassing “argument for a strong British culture that endured the influence of outsiders”.

What that “argument” turned out to be, was an explicitly blood and soil fantasy about the utter destruction of a rich pre-Roman culture by invasion. His grand peroration culminated in the recitation of a passage from a work by Tacitus: possibly De Vita Iulii Agricolae, XXI that bemoaned the corruption of the British aristocracy, with such fripperies as bath houses. Francis Pryor’s view is that such foreign impositions constituted the British donning the trappings of enslavement.

Francis Pryor’s conclusion appeared to be that, because Britain had been invaded by the Romans, we improperly and mistakenly regarded ourselves as their heirs. We must not think we are Romans, exhorted Francis. We must remember that we are Britains, and what being British truely means. Thinking that we were Romans made us invade other countries: when really it just isn’t in our true national character to do so. We are a naturally freedom loving people; possessed by a malign Roman spirit which we must exorcise.  Now, there are interesting observations to be made about the interplay between classicism and imperialism: but this isn’t one of them.

Basically, by the end of the forty-five minutes of the show, I was left feeling as if I’d been exposed to the intellectual equivalent of one of the plastic shop dummies, wearing a cotton wool beard, that stood gormlessly around the Iceni Village.

I do like popular archaeology programmes, and I do like Francis Pryor, but in small doses. It does worry me, though, that he is President of the Council for British Archeology.

There’s a tendency towards sermonising in history and historical dramas. That Robin Hood show, with its creative re-writing of the history of the Crusades to make a rather strained War on Terror analogy, was a particularly notable example. So, too, was Terry Jones’ series,”Barbarians”: which sought to establish that the Romans were crude and boorish, compared to supposed barbarians. His argument was at the strongest, when he discussed the ancient Greeks, whose accomplishments were acknowledged and internalised by the Romans. It was at its weakest, when he looked at other cultures. His main non-Helenic prop was some sort of device for casting horoscopes, I think.

At the heart of all of this, is a bad dose of Noble Savagery. It is the notion that we have lost something important about our essential selves, as humans, when we acquire underfloor heating, or learn basic medical techniques that stop us from dying young. This is, after all, what Tacitus was really saying, when he idealised the lives of the pre-Roman British.  We’ve become weak. We’ve become vulnerable. We’re like women, or worse, Greeks!

I’m not a fan of this way of thinking.