Today, at an event co-organised with the Permanent Mission of the Islamic Republic of Iran to the United Nations, the Quakers will sit down for dinner with President Ahmadinejad:

In New York on Thursday, several international political and religious leaders will meet for an iftar dinner, which marks the end of each day’s fasting during Ramadan.  After dinner, speakers from Muslim, Christian, and Jewish traditions will discuss the role of religious faith in responding to major challenges, such as poverty, injustice, global warming, and war.  A major purpose is to continue dialogue with the Iranian people and their president.

This is our fourth meeting with the Iranian president over the past three years.  Each meeting has made me hopeful for what could happen if the U.S. participated in a diplomacy without preconditions with the Iranian government.  I have great hopes that this dialogue continues to build understanding between our two countries and will allow time for a frank and honest exchange of views.

Here are Ahmadinejad’s views, expressed during his visit to the United Nations:

Great developments in favor of humankind as well as its true and real rights are on the way. A golden and brilliant future is awaiting mankind.

“A global community filled with justice, friendship, brotherhood and welfare is at hand, as I have elaborated. A community which will tread the path of beauty and love under the rule of the righteous and perfect human being, the One promised by all divine prophets and the One who is the true lover of humanity. A community that will be devoid of any fear, despair and privation.

“Such a community will soon be ours. The community promised by the great divine Prophets Noah, Abraham, Moses, Jesus Christ and Mohammad (PBUH) is about to materialize.

“Let us, hand in hand, expand the thought of resistance against evil and the minority of those who are ill-wishers. Let’s support goodness and the majority of people who are good and the embodiment of absolute good that is the Imam of Time, The Promised One who will come accompanied by Jesus Christ, and accordingly design and implement the just and humanistic mechanisms for regulating the constructive relationships between nations and governments.

“Oh great Almighty, deliver the savior of nations and put an end to the sufferings of mankind and bring forth justice, beauty, and love.

“Let’s have a proper share in the establishment of that illuminated and promised divine age.”

But who is preventing this “divine age” from dawning, by standing in the way of Iran’s nuclear programme? Can you guess?

The dignity, integrity and rights of the American and European people are being played with by a small but deceitful number of people called Zionists. Although they are a minuscule minority, they have been dominating an important portion of the financial and monetary centers as well as the political decision-making centers of some European countries and the US in a deceitful, complex and furtive manner.

“It is deeply disastrous to witness that some presidential or premiere nominees in some big countries have to visit these people, take part in their gatherings, swear their allegiance and commitment to their interests in order to attain financial or media support.

“This means that the great people of America and various nations of Europe need to obey the demands and wishes of a small number of acquisitive and invasive people. These nations are spending their dignity and resources on the crimes and occupations and the threats of the Zionist network against their will.

Yes, it is those pesky world-controlling “Zionists”.

Meanwhile, back in Iran, the Government is staging an International Exhibition of the Quran, where you can see horrendously Islamophobic exhibits, which echo the disgraceful MoToons, by suggesting that there’s a connection between the Quran and the desire to kill apostates and Jews: 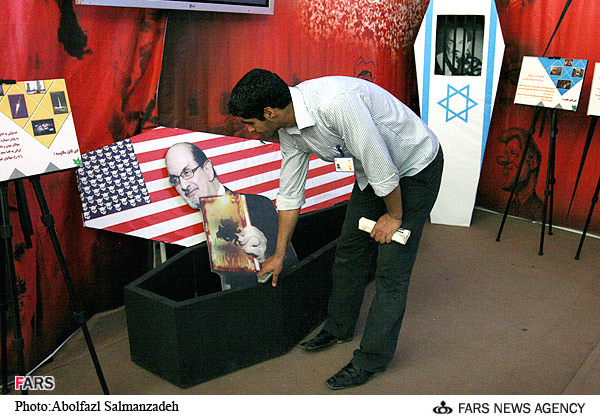 Are these “Quaker Values in Action”?