Church Street in the centre of Liverpool, is a large pedestrianised shopping street. It is also the long standing customary forum on which various small political groups peddle their wares.

If you’re a supporter of the duties of humans to animals, or if you want to encourage people to use fewer plastic bags, or if you think you’ve a chance of persuading the people of Liverpool to vote Militant again (now rebranded as “The Socialist Party”), this is the place to go on a Sunday afternoon. 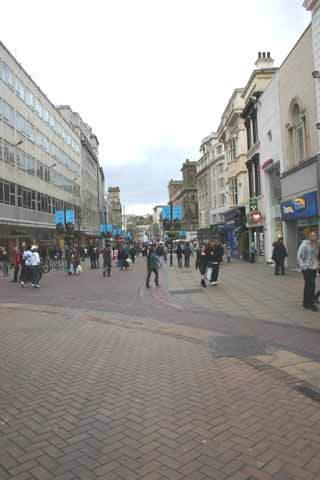 Phil BC at Socialist Unity reports that the council has decided that all these harmless – and fascinating – little political groups are to be banned from the street. And they’re enforcing it:

Over the past few months, there has been growing harassment of stalls and sellers on Liverpool’s streets, from both the police and the council’s wardens. Following threats of arrests, a “mass stall” was held a few weeks ago. Around 12 different organisations, including the Socialist Party, the CNWP, the Stop the War Coalition, CND, Animal Rights, the SWP, Cuba Solidarity, a cycling group, Merseyside Anarchists and the Fight ID Cards campaign set up stalls in defiance of the threats to our free speech.

Last Saturday, at the pitch we have used for years, Socialist Party member Tony Aitman was arrested for “wilful obstruction” after refusing to stop selling papers and collecting petition signatures on a stall against food and fuel price rises.

Tony is well known to Socialist Party members throughout the country; an activist for over 45 years, he is prominent in the CNWP and is a Unison shop steward, a member of Liverpool Unison branch committee. Our stall and papers were also confiscated. What seemed to annoy them most was when one of our (female) members called one of the police “love”!

We will not take this attack on our rights lying down. We have called for a further mass picket this Saturday, 6 September, meeting in Church Street at 12 noon.

Arresting political activists under section 137 of the Highways Act 1980, and other similar charges, has a long and disgraceful history in the United Kingdom. I had very much hoped that – with the advent of the Human Rights Act – that such arrests had come to an end. Evidently not.

We should support the continuation of the right of citizens to engage in what is usually inoffensive, and often both entertaining and informative, low level political activity on the streets of their own cities.

This may not be quite on the scale of the Chinese Government, which arrested Tibet Protestors, bloggers, and two ancient grandmothers during the Olympic Games period.

But it is still a disgrace.