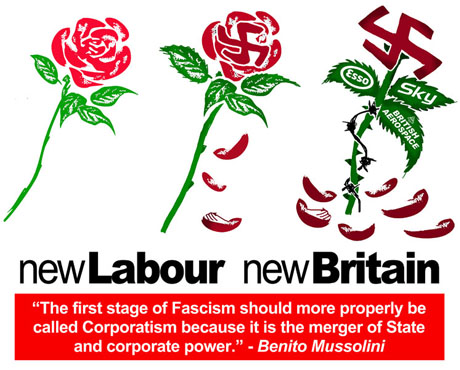 This childish nonsense of a cartoon isn’t the work of some Indymedia twit. Alas, it was published on the Socialist Unity blog by Derek Wall, the Principal Speaker of the UK Green Party. I have quite a few friends who are Greens, so it pains me to see a sign of the party’s decent into far-left farce.

It should go without saying that the Swastika is the symbol of one of the most unimaginable evils to afflict the 20th century. Millions of people died horribly as Europe – and most of the world – were plunged into darkness. It is not an image that should be evoked lightly or frivolously. Any politician who doesn’t understand this has no business being in politics.

Yes, this should go without saying.

Of course, Mr Wall could genuinely believe that the Labour Party is the equivalent of the Nazi Party. In which case… oh what’s the use…. never mind!