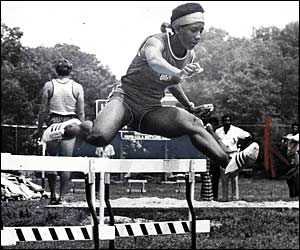 Writing in The Washington Post Magazine, Lacey O’Neal, a hurdler who competed for the USA in the 1972 Munich Olympics, recalls how the horrible events there touched her personally:

In Munich, they had a disco area in the Olympic Village. I had a friendly rival, Esther [Shachamarov], an Israeli athlete. We were both hurdlers, and our times almost matched. One night, I came into [the entrance to the disco area], and Esther and her coach were sitting there. I had a TWA — a teeny-weeny afro — but I wore a wig, a big old bush, when I wanted to dress up. Esther and her coach were laughing; they’d never seen me with all this hair. I took [the wig] off and put it on her coach.

The next day when I woke up, I could feel something in the air. It was solemn. People weren’t moving around. There was a helicopter hovering. I went to breakfast and started hearing rumors. But it wasn’t until later in the day when all the athletes from the United States were called together and told that 200 meters away from my dorm, members of the Israeli men’s team had been taken hostage. The police were getting all the Israeli and Jewish athletes out of the village for their safety.

In the Olympic Village, there so many tears and so many emotions: We were indignant; we were accusatory; we were insulted. These were intruders. How could they bring this political thing to the Olympics?

The next day was the semifinals for the hurdles. Esther’s lane was right next to mine, and it was empty. I didn’t know what had happened to her. Warming up, I had tears in my eyes. But, as an athlete, you’re supposed to put everything else behind you. I ended up running one of my best times.

Afterwards, I found out that Esther’s coach was one of the people who was killed. I think I broke down right there in the village. Normally, athletes are allowed to stay and watch other events after they’re done, but we were encouraged to leave, for safety’s sake. I went home one or two days after my event.

Why did these athletes have to be killed for a political cause that they had nothing to do with?” And all the Jewish people who did not have a chance to compete. No one had ever penetrated the Olympic Village before and harmed athletes. It was tragic.

Not on the same scale of tragedy, buy discouraging nonetheless, is the news that the International Olympic Committee has banned Iraq from sending a team to the Beijing Olympics due to a dispute between the government and the national Olympic committee.

What makes this especially hard to take is that Iraq was permitted to send teams to the Olympics when the country’s Olympic committee was headed by the late and unlamented Uday Hussein, whose motivational techniques included the torture of underperforming athletes.

Update: Good news. Iraqi athletes will be allowed to compete after all.