Back in February I linked to yet another depressing clip from the Hamas TV children’s program in Gaza, “The Pioneers of Tomorrow.” I wrote:

If you’re looking for a bit of consolation from all this, perhaps it’s the little girl’s obvious lack of enthusiasm at the prospect of being martyred herself, despite Assud’s [the rabbit character] encouragement.

OK, maybe I read too much into it. And maybe I’m doing the same here. But watch this latest clip from another episode of the same series. 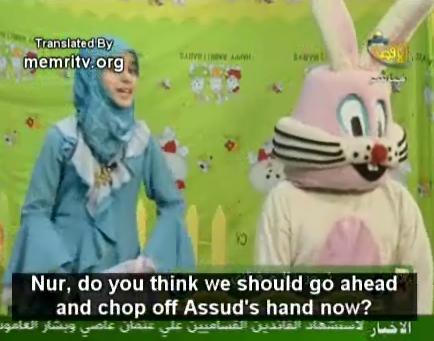 The obvious point here is to discourage children from stealing by frightening them with Quranic injunctions to chop off the hands of thieves. But I can’t help sensing that the same girl-host, Saraa, sees the whole heavy-handed exercise as a bit ridiculous. Watch her face at the end.

A paragraph from “Nineteen Eighty-Four” comes to mind, from the chapter in which Winston has lunch with the philologist Syme, who on the surface seems utterly loyal to the totalitarian regime:

One of these days, thought Winston with sudden deep conviction, Syme will be vaporized. He is too intelligent. He sees too clearly and speaks too plainly. The Party does not like such people. One day he will disappear. It is written in his face.

I hope Saraa does not meet Syme’s fate. But as long as Hamas is in control, one can only fear for the psychological and physical fate of the children of Gaza.