Before taking off for Tehran to celebrate the first anniversary of one of his income sources (the Iranian government-funded Press TV, for whom he does a program), George Galloway wrote: “I don’t even like the present Iranian leadership…” I doubt he ever mentioned this on Press TV, but this seems to be a subtle dig at President Mahmoud Ahmadinejad, whose series of outrageous assertions may be too much even for Gorgeous George.

Galloway wrote that during his visit “I hope to meet Ali Larijani, formerly Iran’s nuclear negotiator, now speaker of the Iranian parliament and, I hope, the next president.” So clearly Galloway’s problem is not with the existence of a repressive theocratic regime with a thin veneer of electoral democracy, but simply with the person who happens to occupy the relatively weak position of president.

I suppose it won’t make any difference to Galloway that Larijani apparently supports a bill in the Iranian parliament that would “toughen punishment for disturbing mental security in society” and would add “establishing websites and weblogs promoting corruption, prostitution and apostasy” to the list of crimes punishable by death.

In recent years, some Iranian bloggers have been sent to jail and many have had their sites filtered. If the Iranian parliament approves this draft bill, bloggers fear they could be legally executed as criminals. No one has defined what it means to “disturb mental security in society”.

Such discussion concerning blogs has not been unique to Iran. It shows that many authorities do not only wish to filter blogs, but also to eliminate bloggers!

About a year and a half ago, the Iranian government demanded that bloggers should register and provide their names and addresses on a site called Samandehi. Many people believed such a process would facilitate legal action against them.

Bloggers resisted and many published an “I do not register my blog/site” banner on their blogs. The Government then realised it cannot have real control of the situation, or force bloggers to register. 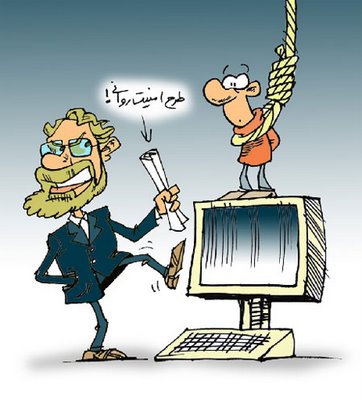 What are the chances of Galloway raising concerns about this with Larijani or any other Iranian officials? About as good, I suppose, as him requesting a visit with Tehran bus workers’ union leader Mansour Osanloo.