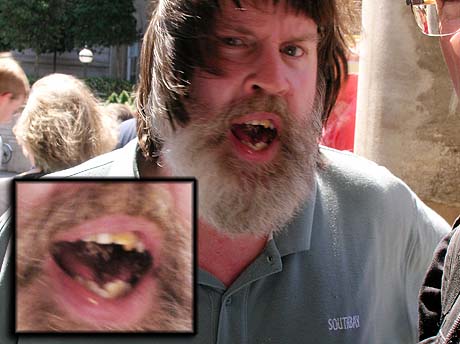 It’s a gruesome image, of course. Wickedness is always ugly. This man personifies the “Sin of Sodom”, according to Ezekiel 16:49.

‘Now this was the sin of your sister Sodom: She and her daughters were arrogant, overfed and unconcerned; they did not help the poor and needy.

Older translations of The Bible seem more specific. The King James version talks of “fullness of bread, and abundance of idleness”.

Yes, this homophobic, abusive and ludicrous man, spitting half-masticated crumbs of bread, is very concerned with the sins of Sodom. He is a supporter of the biblical literalist sect, the Fellowship of Conservative Anglicans which launched itself as an alternative to the “liberal” direction it says the Anglican Communion is taking.

The sins of Sodom, our pushy and puce churchwarden thinks, have everything to do with gay people and nothing to do with overweight middle-aged men, who shovel so much food into their mouths they can hardly speak coherently (or hygienically) and clearly do very little exercise. Overfed and idle. These are your deadly sins. Yet, there is no schism looming the Anglicanism over the church employing the rotund of girth.

Yesterday at short notice I joined Peter Tatchell and a gay Ugandan activist Kizza Musinguzi outside All Souls Church, London to protest the support this branch of the Anglican Church is giving to the victimisation of gay and lesbian people. This off-shoot is falling behind the vicious and ‘outspoken’ Archbishop of Nigeria, Peter Akinola. In the UK, Europe and North America, the damage these hateful bishops can cause is minimised by secular equality legislation. But in Africa – especially – the effects can be far worse.

Speaking to some of the attendees afterwards, I was struck by how little they actually knew about the average gay person’s life. Some went on about AIDS, as if their homophobia was actually an act of compassion. The irony, of course, is that in today’s world – once again, especially in Africa – AIDS is overwhelmingly a heterosexual issue, and attacking gay people, least of all gay Africans, will do nothing to bring the pandemic under control.

In an effort to prime the Bishops attending the Lambeth Conference this month, The Lesbian & Gay Christian Movement is running a “Buy a Book for a Bishop” campaign, which it explains in this video. LGCM hopes to educate the conference delegates about the lives of lesbian and gay people. I’m certain that many of the attendees of yesterday’s meeting will prefer the certainty of ignorance, but hopefully some minds – and hearts – will be changed.

Hopefully one will be the tubby sodomite pictured above.