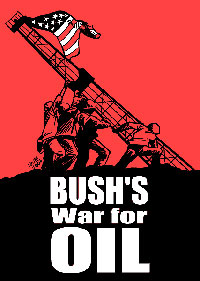 For many the Iraq war was about oil. Even back in 1991, I remember my anti-war friends bleating on about oil, and not really paying attention to the aggressive invasion of another state by a despot. Of course, such thoughts are simplistic, any Western actions in the Middle East can be viewed as being concerned about oil, although quite why the West supports the oil-free Israel seems to pass them by.

The Iraq war was not primarily about oil, but there is a role that oil plays in conflict. Oil causes internal conflicts. Despite the general decline in major conflicts, conflicts in oil producing countries have not fallen.

Indeed, without a well-developed civil society, the rule of law and a robust democratic politics, the discovery of oil is a negative experience for many citizens. Putting oil into a weak democracy is akin to putting a giant redwood on a camel’s back. In the May/June Foreign Affairs issue, Michael L. Ross lays out the problems of oil production on weak societies, the parallels with the conflict diamond trade (which has been tackled to a large extent), and how oil props up poor governments:

Oil revenues tend to increase corruption, strengthen the hands of dictators, and weaken new democracies. The more money the governments of Iran, Russia, and Venezuela have received from oil and gas exports, the less accountable they have become to their own citizens — and the easier it has been for them to shut up or buy off their opponents. A major boom in oil prices, such as the one that took the price of a barrel from less than $10 in February 1999 to over $100 in March 2008, only heightens the danger.
[..]
The world’s thirst for oil immunizes petroleum-rich governments from the kind of pressures that might otherwise force them to the bargaining table. Since these governments’ coffers are already overflowing, aid means little to them. They can readily buy friends in powerful places and therefore have little fear of sanctions from the UN Security Council. In any event, the growing appetite of oil-importing countries for new supplies makes it easy for exporters to bypass such restrictions. The government of President Omar al-Bashir has used Sudan’s oil sales to China to deflect diplomatic pressure from Western states asking it to stop the killings in Darfur. Myanmar’s military government is following the same strategy: in exchange for Myanmar’s selling its natural gas to China, Beijing is blocking tougher sanctions against the junta in the UN Security Council.

The rising oil price in Venezuela is unlikely to help opponents of the increasingly dictatorial Chavez. Although it goes against the conventional view, we should be thankful that Mugabe does not have oil. Rather than giving the West an excuse to intervene, it actually makes Mugabe more vulnerable in the long-term.

But today brings interesting news on Iraq. The Iraqis are going to open up their oil fields. To some, this will be proof that evil capitalists were behind the war, quick to jump upon Iraq’s plentiful supplies. Large corporations may make money. The left does not like that. Here’s The Independent from January 2007:

So was this what the Iraq war was fought for, after all? As the number of US soldiers killed since the invasion rises past the 3,000 mark, and President George Bush gambles on sending in up to 30,000 more troops, The Independent on Sunday has learnt that the Iraqi government is about to push through a law giving Western oil companies the right to exploit the country’s massive oil reserves.

My concern is different. I’m happy to see the Iraqis make money. But I worry that they are not ready for it. Note the date on The Independent article, January 2007. Iraqi politicians have still not agreed how the oil revenues will be used. In older, simpler, days such funds could be be used to buy influence at the UN, but now the Iraqi government will have the responsibility to use such funds for the Iraqi people. To use the oil to heal rifts in the country. To build a nation from a former open prison and torture chamber.

Will all the good news about Iraq since the surge began to work be undermined by increasing revenues? Is Iraq’s democracy strong enough to handle oil, or will the oil poison their politics? I worry it will, but there is one sign that may indicate a step in the right direction.

Not all corrupt politicians are in oil-producing states. To this end, the Iraqi government are attempting to sue those who profited from the UN Oil for Food scheme, which is a good first indicator of Iraq’s stance on oil revenues. May their politicians be better than some of those in the West.